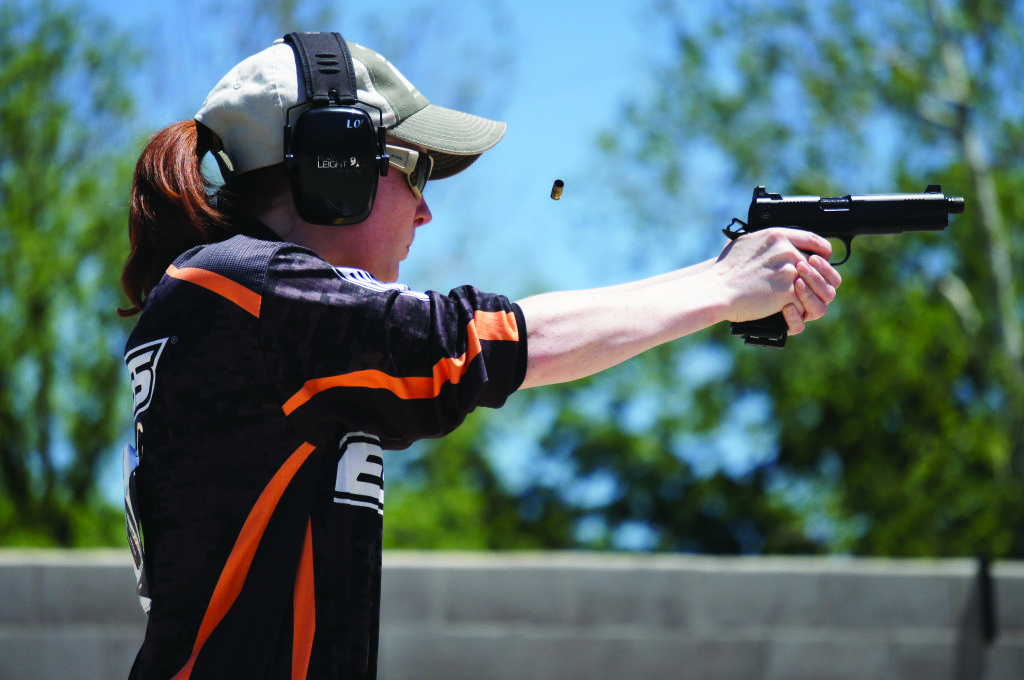 Bianchi Cup is different from any match I’ve experienced. It was my first major match, but I don’t think that was it. Even veteran competitors will tell you that Bianchi Cup is different, steeped in tradition with a vast prize table. I’ve been told it’s “what a national championship should feel like.” While I’m new to this game and couldn’t tell you what a national championship should or shouldn’t feel like, I did feel like Bianchi Cup was important, and if nothing else it was extremely emotional.

Probably the best example of this emotion was the battle for the Women’s Championship. It came down to Jessie Duff, captain of Team Taurus and multi-time national champion, against Tiffany Piper, Bianchi Cup 2012’s Junior Champion and a young woman who has dedicated most of her training to this event. Before their final event, the Mover, Tiffany was up just 10 points where Jessie had dropped a plate earlier in the match. Jessie shot first and dropped 11 points, meaning Tiffany had score a 459 out of the possible 480 points to win the Women’s Championship title.

Watching the range officer turn over Tiffany’s targets after she shot was heart wrenching. On the last target, there they were – three fives, dropping her down 15 points with those three shots alone. Tiffany dropped 29 points total on the stage, giving her a score of 451. In the end Jessie took the Women’s Championship 1893-142X to 1885-143X. Tiffany was still able to take home the Junior’s Championship one final time, since she is 17 this year she will not be eligible to compete as a junior next year. 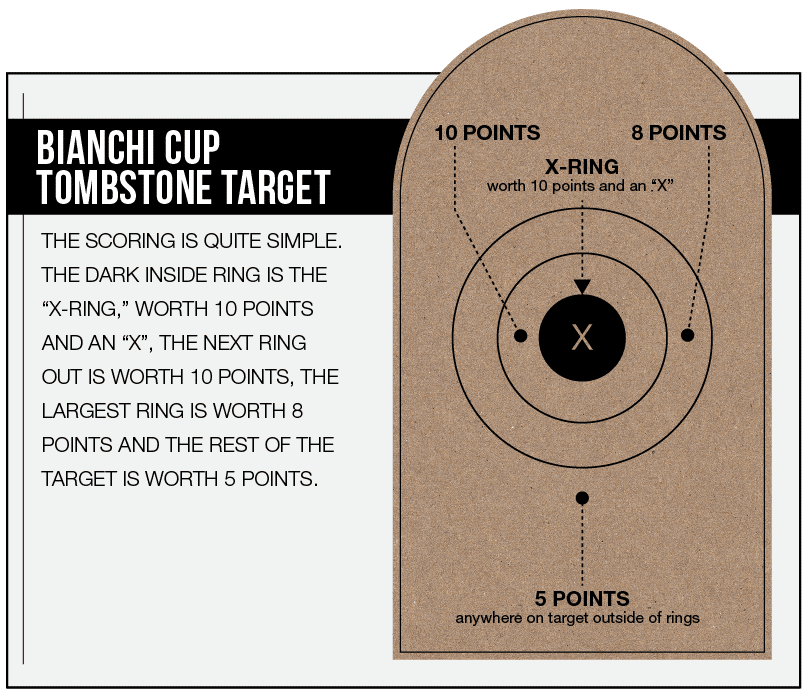 My own shooting experience wasn’t nearly that heart wrenching. I’m a magazine editor, everyone jokes that gun writers can’t shoot. I was nervous though, I didn’t even know the course of fire until we showed up to the practice range the Sunday before the match: Barricade, Mover, Plates, Practical, 192 shots total.

I decided not to worry on score while I was shooting my first day on the practice range. I wanted to feel comfortable on what I was doing first so I focused on trying to get my shots in time and remember the course of fire. The next day I started paying attention to my scores; I discovered I was averaging about 1,000 out of the 1,920 points possible and, given everything, felt comfortable with that.

Then the day came: The day I shot the first stage of my first major match. It was the Plates, my worst event of the four. If you start missing plates on the plate racks, the plates that stay standing taunt you It’s a lot easier to tell exactly how you’re doing and it’s a lot easier to worry about it. I thought I was going to throw up.

I didn’t though; I didn’t throw up for the entire match. It’s amazing how exhilarating, exciting and fun it is every time you get to go out on the range. “Just relax,” I told myself, “Do your best, shoot your best, you’re having fun, that’s what matters.” So that’s what I did, and I ended up completing the match with a score of 1,164. I shot pretty close to what I did in practice, gave myself a score worth beating next year, and had a great time doing it.

It was just as much fun when I wasn’t shooting as when I was. There was so much to see, so many people to talk to. Everyone was outgoing and friendly and willing to help a new face, but if there was no one around to talk to it was just as enjoyable to watch the match, especially if the top competitors were shooting. There was so much emotion; you could see it in people’s faces if they were shooting well, or not so well. It’s not very often you get to see this kind of involvement at an action pistol match, but how the match is spread out, the amount of time invested in it, and the large prize table all make for way more moving of a match than you normally see.

Bianchi Cup is an accuracy-based event that uses par times and points based scoring to create an easy-to-shoot but difficult-to-master course of fire. That means each string gives you a certain amount of time to shoot a certain number of shots and any extra shots in that time period will incur a steep penalty.

The Barricade is a fairly straight-forward stage: four barricades set up at 10 yards, 15 yards, 25 yards and 35 yards. At each location you are required to take six shots around either side of the barricade from within the 2’x3’ shooting box. The par times for this stage vary depending on your distance from the target:

Because of the shooting box, competitors must stay standing for the entirety of this stage. However, all divisions allow shooters to brace their hand against the barricade, and in Open shooters can even install what are known as wings to brace the gun itself on the barricades for maximum stability.

To some, the Mover is the most difficult stage in Bianchi Cup, for others it’s the easiest. The Mover consists of four targets and four shooting boxes. The targets are all on a line at the end of the range, and the shooting boxes are 10 yards, 15 yards, 20 yards and 25 yards out. When the shooter is ready, the target moves across the end of the bay, giving the shooter six seconds to engage. The first two boxes consist of two strings of six rounds each, while the further boxes require four strings of three rounds each.

Shooters choose to either follow the target from the beginning, or wait for the target to catch their sights. Similar to strategies used in skeet, shooters have to decide how far to lead the target or not depending on the caliber, firearm and ammunition they are shooting.

The Plates are the most simple to stage to understand, but the most challenging to shoot for many competitors. A plate rack with six plates is set up at the end of the bay and shooters engage the rack twice from 10 yards, 15 yards, 20 yards and 25 yards, with a different par time set at each distance.

Because the Plate are so visual, and it’s so much easier for shooters to track their progress – or see if they’ve left a plate standing – the plates can be an extremely emotionally charged event that really gets into competitors’ heads.

In the Practical, shooters are required to engage two targets with one shot each, two shots each, and three shots each, either standing or prone, from 15 yards, 25 yards and 50 yards. There are also several strings that are required to be shot at 10 yards, these must be engaged standing, competitors engage each target once, twice, and then on the third string at 10 yards competitors engage the targets three times each but may only use their support hand.

Three of the NRA Action Pistol divisions are allowed in Bianchi Cup: Open, Metallic and Production.

Open firearms include any semi-automatic handgun or revolver that is serviceable and safe. Open firearms are allowed to have any modifications that do not interfere with the guns safety. Most Bianchi Cup open guns include a compensator, a red-dot optic, and wings to stabilize the gun on the barricades. Bianchi Cup requires a minimum caliber of 9x19mm.

Metallic guns have a maximum barrel length and sight radius. They also prohibit wings, peep, ghost optical or electronic sights, grips that encircle the hand, thumb rests, and compensators or ported barrels. While you can build sport-specific metallic guns, the most popular firearms for this division are 1911-style pistols, such as the Nighthawk Custom I was using.

The production division was designed to spread the sport at a grass roots level. The idea is that shooters can use factory guns out of the box and avoid an equipment race. Limitations on production guns include, but are not limited to, grip stippling, trigger weight, wide-style hammers and triggers, modifications to the slide and frame, single-action only guns, compensators, and only draw-from-the-top holsters may be used.

I was nervous going into my first Bianchi Cup, but part of what helped me through the nervousness was knowing I had an awesome gun and a sweet set up. Nighthawk Custom sent me this awesome 1911 in 9mm designed for Advanced Armament Corp. (You know, the cool guys who make silencers?) and decked out with a bunch of cool features. Most recognizable are the AAC grips, the tall sights and the threaded silencer-ready barrel. Not that any of these helped me shoot the Cup, but they gave me automatic awesome points, which are invaluable in any competition. 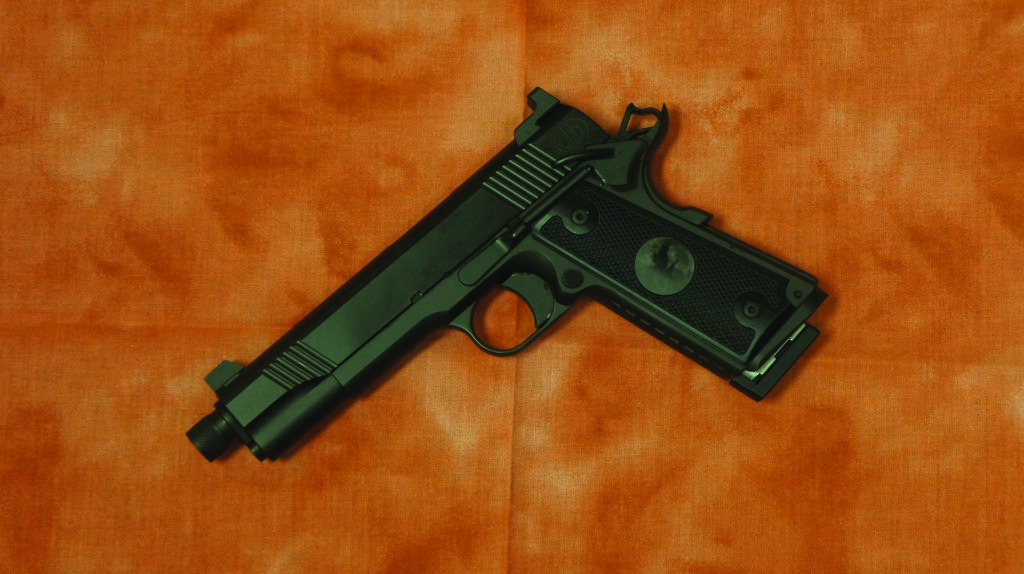 The one thing about the gun that was extremely important to shooting the Cup was its accuracy. It hit where it was supposed to every single time. Having a heavy full-steel 9mm was also important to me, since that made the recoil more controllable and helped me get the gun back on target much quicker. Sure, it isn’t a Bianchi Cup metallic gun by any means, but it was fun to shoot, and the whole point is to have a good time, isn’t it?

By Shelley Rae. Originally published in the July 2013 issue of GunUp the Magazine.