The Question of Steel Cased Ammunition 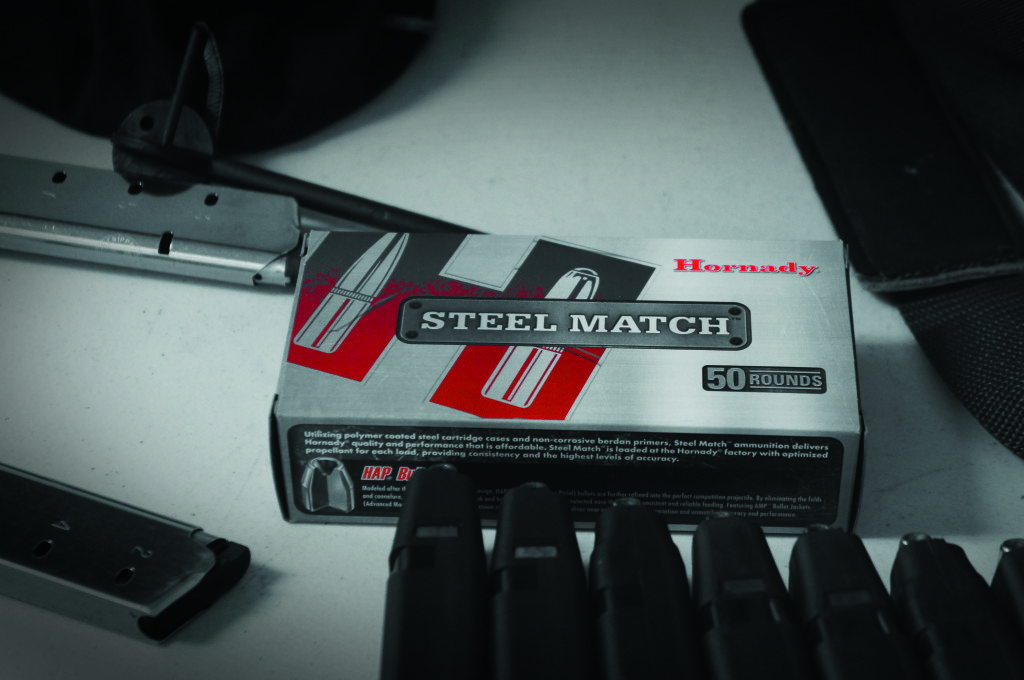 The question: what effect, if any, does shooting steel cased ammo have on a modern service handgun?

For the test I primarily used a Gen4 Glock 21 pistol, which of course was chambered in .45 ACP. The pistol had no modifications to the internal parts other than changing the recoil spring. At the start of the test we measured thickness of the chamber wall and the dimensions of the extractor to guarantee they were within the Glock standard tolerances for a factory gun (they were). The test ammo used was primarily TulAmmo 230 grain FMJ, which is a standard brass jacketed lead bullet in a mild steel case. Also used was Hornady Steel Match and a small quantity of Wolf ammo. Total rounds fired were 11,762. Some additional shooting was also done with a heavily customized Glock 21SF, however those results are not included in the test. 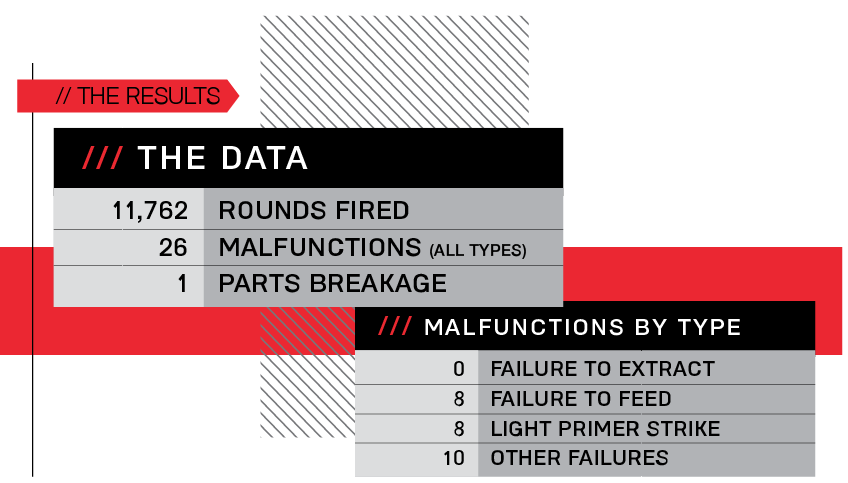 The lone parts breakage was when the stock Glock RSA that came with the gun suddenly decided to die, which caused four of the eight failures to feed. The gun was fine, and then it decided it just didn’t want to return all the way into battery. Swapping out a fresh RSA immediately cured the problem. The recoil spring died at 3000 rounds, after that incident the spring change interval was set to 3k to avoid future issues. The failures marked as “other” were an interesting issue that I’ve only encountered with steel cased ammo. Under very specific conditions (cold weather, dirty magazines, and steel cased ammo) the ammo would bind on the walls of the magazine and keep the spring and follower from pushing the next round up to be fed into the chamber. This happened with Hornady Steel Match and the TulAmmo, and occurred in multiple magazines testing. It also only occurred during cold weather and could not be replicated in a controlled environment with temps above 50 degrees. Additionally, disassembling and cleaning the interior of the magazine with a brush would solve the problem.

With 26 failures over 11,762 tested rounds, the failure rate of the gun was 0.22%. Keep in mind that the military standard is 0.05%, and the generally accepted industry standard is between 0.05% and 0.1%. At the end of the test, the Glock’s chamber dimensions and extractor were again measured, and were still well within the established tolerances.

Conclusions
We set out to test two questions – will steel cased ammo damage a modern service pistol, and to find out just how reliable steel cased ammo really is. The answer to the first question is a conclusive “no”; 11,000 rounds is far more than most gun owners will shoot through their pistols in its lifetime. There no indications of excessive or damaging wear to the Glock during the test, and never once did it explode in my hands; something I’d be cautioned Glocks do when firing steel cased ammo.

The second question to the reliability of steel cased ammo is also fairly obvious – it’s not as reliable as brass cased ammo in a modern handgun. The same Glock 21 Gen4 went on to fire 5,000ish rounds of brass cased .45 ACP ammo without a single failure to complete its cycle of operation. When the numbers show zero malfunctions with 5k rounds of brass ammo, compared to 26 malfunctions with steel cased ammo, that’s a reasonably clear result to me.

Later in the year, Lucky Gunner labs would do a similar test (with similar results) using AR pattern rifles. One major difference between the LG test and ours was that in rifles shooting steel cased with a bi-metal jacket there was quite considerable barrel wear; that wasn’t encountered when testing pistol rounds with bi-metal jackets. My theory is this is due to significantly lower pressures and velocities of pistol rounds as compared to .223 ammo. If you’re worried about steel cased ammo damaging a modern, well-made pistol: it won’t. If you’re wondering if steel cased ammo is reliable enough to count on for matches/self-defense: it isn’t. For handguns, it’s perfectly acceptable training and practice ammo, but it’s not something I’d want to be a trophy, or my life on.

By Caleb Giddings. This article previously appeared on www.gunnuts.net. Published in the May 2013 issue of GunUp the Magazine.