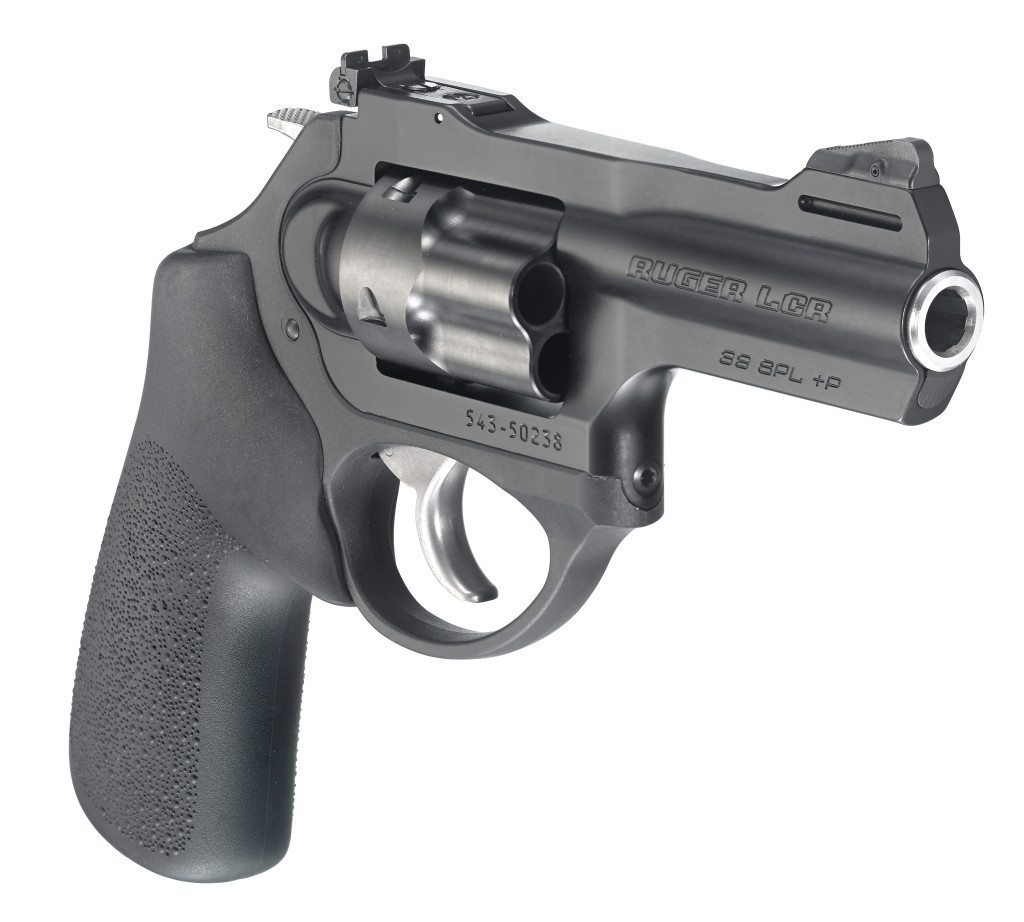 The latest version of the Ruger Lightweight Revolver, the Ruger LCRx with a 3” barrel, transforms the design from a snub-nose carry gun into a handy general purpose revolver.

The innovative LCR design has been a hit with shooters since the original Ruger LCR .38 Special +P was released in 2009. That design was optimized for concealed carry with a five-round cylinder, 1.875” barrel and hammerless, double-action only, trigger. Since that time Ruger has expanded the line by chambering the gun in new calibers and adding new features. The LCRx model added single-action capability by introducing an exposed hammer to the available options but retained the short barrel length.
In November 2014 Ruger released the LCRx with a 3” barrel. This newest variant is again chambered in .38 Special +P with an exposed hammer that allows both double-action and single-action activation. The 3” tube has a full-length rib and full-length underlug. The black rear sight is adjustable for both elevation and windage. The serrated front sight features a white square to aid in sight acquisition. The sight is pinned to the barrel and can be easily removed and replaced with one of the other front sight options available from Ruger. The package is completed with the installation of a full-size Houge Tamer grip in place of the shorter grips on the previous models.

The rest of the gun follows the general LCR pattern: The two main structural components are the aerospace grade aluminum frame mated to a polymer fire control housing. The lock work includes a patented friction reducing cam that eliminates stacking and reduces the perceived trigger weight. The stainless steel cylinder is heavily fluted for weight savings with a durable black Ionbond Diamondblack finish. The push-button cylinder release is in the normal Ruger location on the left side of the frame behind the cylinder. The barrel utilizes a stainless steel liner and aluminum shroud with a polished muzzle. The ejector rod is the same length as on the 2” barreled models. The one-piece grip fits onto a shorter grip peg molded as part of the fire control housing. The grip can be removed and replaced by unscrewing a single screw in the butt.

The review model I was sent came in zippered ballistic nylon case in a white Ruger-marked cardboard box. It included an owner’s manual and the requisite cable lock and fired case so it can be distributed in those jurisdictions that require either item.
The first thing I noticed was the size of the revolver. While the LCR heritage is evident, this is no pocket gun. The extra inch of barrel, full-length rib, and larger sized Houge grip add enough to the physical envelope to push it into the small-side of the medium-frame revolver category. 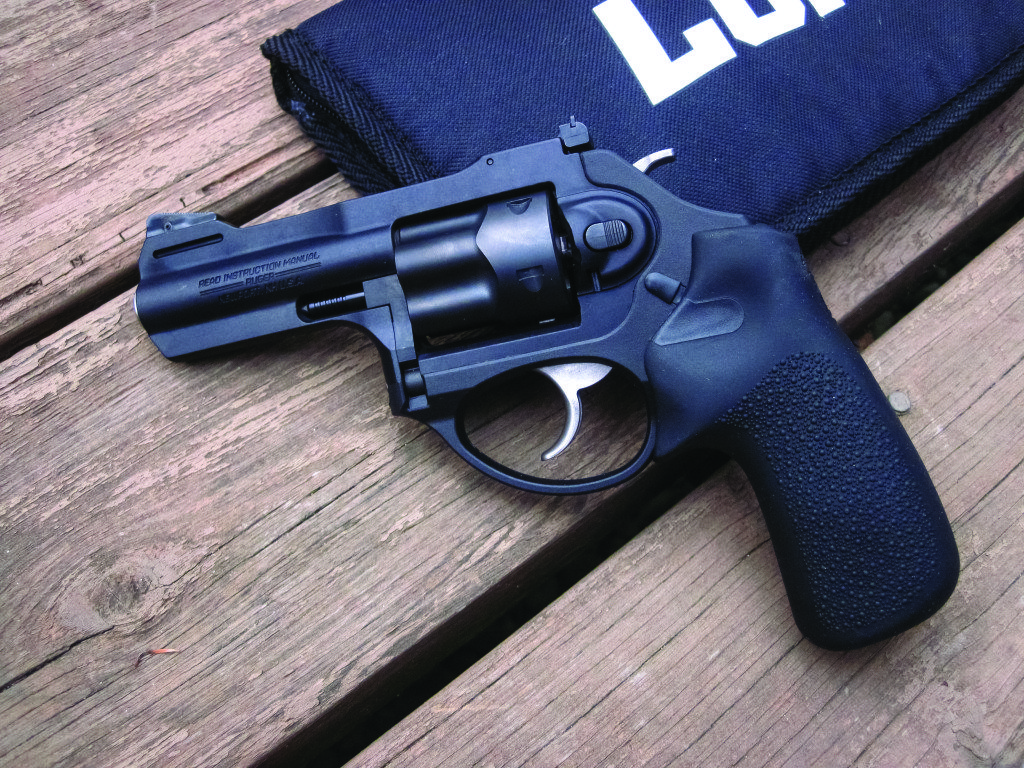 The three-inch barrel increased the overall length to 7.5” while the full-length rib and larger Houge grip make it taller at 5.8”. The LCRx 3” weighs 15.7 ounces. For comparison the standard 2” barrel .38 Special LCR is 6.5” long, 4.5” high, and weighs 13.5 ounces.
I had my gunsmith measure the trigger pull with a Lyman digital gauge when I picked up the revolver. This revealed a pull weight of 11.5 pounds for double-action and 7.0 pounds for single-action.

I tested the gun with a variety of .38 Special loads provided by Hornady Ammunition. This included their Critical Defense Lite 90 gr FTX load, their Critical Defense 110 gr FTX standard and +P loads, their 125 gr XTP load, and their 158 gr XTP load.
I warmed up by shooting a few rounds at a plate rack at 15 yards to give me a general feel for the double-action and single-action trigger pulls. I then fired for groups at 25 yards while seated at a table with my hands resting on the LCR’s zipper bag for padding. All firing here was single-action.

The second best group was from the Critical Defense 110 gr standard pressure load that printed at just over 3 inches, from furthest-to-furthest, with pronounced stringing from left-to-right.

Unfortunately, the deliberate single-action, slow-fire, shooting revealed a mechanical problem that I hadn’t noticed during the more casual firing at the plate rack. The hammer was noticeably more difficult to cock on one of the chambers than the others. I later consulted with a gunsmith friend who said the likely cause was due to out-of-spec machining on the lobe of the star corresponding to that chamber. (I later cleaned the gun and the problem was still there during dry fire with the clean gun).

The one bad hammer pull made the precision testing more difficult. I only got the best two groups later in the test after I identified and compensated for the issue. At first the heavier and grittier pull on that chamber both threw off my concentration and also caused me to break my grip. This also made it impossible to determine if any particular load was more accurate in the gun. A typical “bad” group was five inches or so, often with one flyer that messed up an otherwise good group.

We Like
In return for the slightly larger size and weight over the flagship LCR you get a revolver that is easier and more fun to shoot. The grip is large and comfortable, the hammer is easily accessible for single-action cocking, and the longer sight-radius and more visible sights help practical accuracy. The extra weight over the standard .38 Special version helps make the gun more pleasant to shoot as well. While the +P rounds had some noticeable sting, they weren’t bad, and the polymer trigger housing and generous grip soaked up the recoil of the standard pressure rounds nicely.

We Don’t Like
The only disappointment in the design was that the gun retained the short 2” ejector rod of the parent models. While it’s understandable that Ruger wouldn’t want to spend the money on a dedicated 3” ejector rod for this model, having that full ejector rod stroke would have been a nice touch. Note that I didn’t have any problems with the shorter ejection stroke, I just prefer the longer ejector rod when possible.

As to the execution, while the machining issue on this specimen is troubling, my experience with other Ruger products leads me to believe this is an exception. This is the fifth or six LCR I’ve been able to try out and the first one I’ve encountered with any mechanical issues. I’ll be sending the gun back to Ruger for repair and will report back on the results at the GunUp website.

The Verdict
The Ruger LCRx 3” would make an excellent choice for a lightweight trail gun, as a concealed carry gun in a belt holster, or as a home defense gun. As with most revolvers, the limited ammo capacity is an issue, but if you want lightweight revolver that shots like a medium frame gun, this is one to get.

Originally published in the August 2015 issue of GunUp the Magazine.