Choosing a shotgun for your home defense firearm will likely greet you with some heavy debate. From those who view it as “antiquated” and not quite up to par in comparison to an AR for example, to those who buy into every “Hollywood myth” they’ve seen or heard about shotguns. Discussions can become heated as emotions run high for those passionate about whatever their choice may be. The fact remains that there are people who choose to utilize a shotgun for home defense. Rather than pushing a different platform, my goal is to expand and educate on a choice they’ve already made. This article will cover what I believe to be the top three home defense shotguns and why.

I would be remiss if I did not address the myths that Hollywood has elaborately displayed on the silver screen, along with some that simply come from lack of knowledge. First, birdshot should never be your home defense ammo. It’s called birdshot for a reason and unless a crazed pigeon is threatening your very life, it’s not going to do much regarding stopping an actual threat. Shotguns do have admirable stopping power, but ammo does factor into that equation. Buckshot should be your go-to choice. That said, even buck shot will not lift a human up and send them out the window, it’s not a one-shot wonder and you will more than likely need to fire a second or third time. Lastly, aiming is essential. The notion that a shotgun is simply point and shoot will make it more luck of the draw. Home defense equivalates to close quarter shooting. There is literally not enough time for the rounds to pattern and spread the way they would if given the distance, so being able to aim and hit your target is crucial. These are just brief points but very important ones to be considered and time taken to educate yourself on.

First up is the Mossberg 590M. The 590M is a 12-gauge, magazine fed, pump-action shotgun. Being mag-fed has its advantages. Each pull of the trigger essentially gives you 8-9 rounds consistently when using #00 Buckshot with the options of a 5, 10, 15 and 20 round magazines. It’s also pump-action which translates into reliability. Malfunctions due to a gas operating system or any type of needed inertia are now out of the equation. The 590M does require being shouldered which gives you quicker sight acquisition and better accuracy. Some of you may be wondering about my choice here given this shotgun is 39.5” in length. For larger men this is a non-issue, but for a smaller man or woman this length can make this shotgun difficult to get behind while shouldering and running the pump action. It already has some heft to it coming in at just under 8 pounds, which aids in recoil management but also adds in handling difficulties when the length is longer. I personally changed out the buttstock and incorporated a 12” stock from Hogue. This shaved about 4” allowing me to fully get behind the gun. If recoil is a concern, one product worth checking into is the Falcon Strike Hydraulic Recoil Reduction System. This is a recoil pad that replaces the current butt pad on your stock. Utilizing the same dampening technology proven in the aerospace industry recoil, muzzle lift, peak force and rock-back issues are all drastically reduced enabling a more comfortable and accurate shooting experience. You can learn more at www.falconstrikeusa.com. 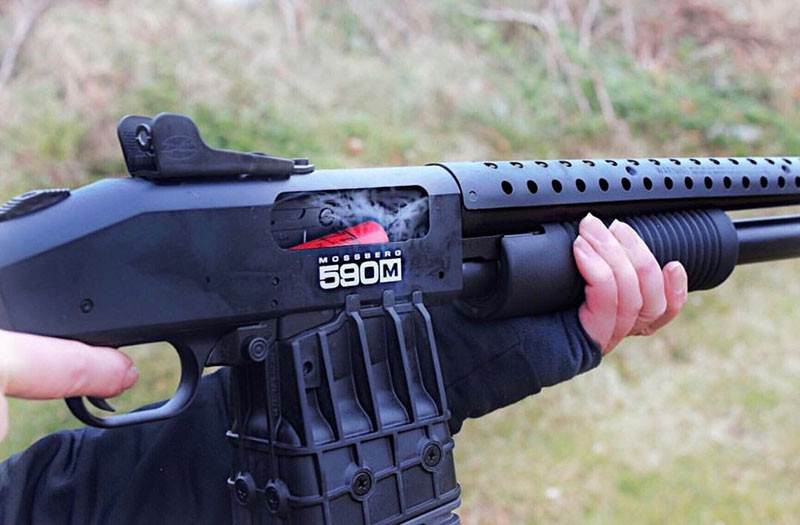 Next, the Remington 870.  This is one of the best-known shotguns in the US and is used by most law enforcement agencies around the country.  This is a 12-gauge, 6+1 capacity, pump- action shotgun that has a proven record of reliability.  While there are literally 26 versions of this shotgun available, I suggest the Express Tactical Magpul model.  It has a smaller 18 ½ inch, quick pointing barrel and is a bit easier to manage indoors. It boasts a Magpul stock along with a Magpul tactical style fore-end and is milled from a solid billet of steel allowing maximum strength and reliability.

Finally, the Mossberg 590M Shockwave. Like the others, this gun is also a magazine-fed,12-gauge, pump-action shotgun. The unique birds-head grip does not require it to be shouldered but instead lends the ability to shoot in various positions. The Shockwave shares the same 5, 10, 15 and 20 round capacity magazines as the 590M, but it’s significantly shorter giving you a bit more freedom to wield it around corners and utilize it in tighter spaces. People tend to think that since this gun is not shouldered it’s going to be hard to control. This couldn’t be further from the truth. The sheer design coupled with the weight of the magazine balance this gun very well, so the recoil is minimal. The problem that often arises is people literally stop aiming and turn this gun into a point and shoot event. You still need to utilize the gold bead sight when aiming. Also, the grip must be raised up higher than the barrel to get an accurate hold. If you choose to utilize this gun, invest your time into training to really perfect your grip, sight acquisition and sight alignment. 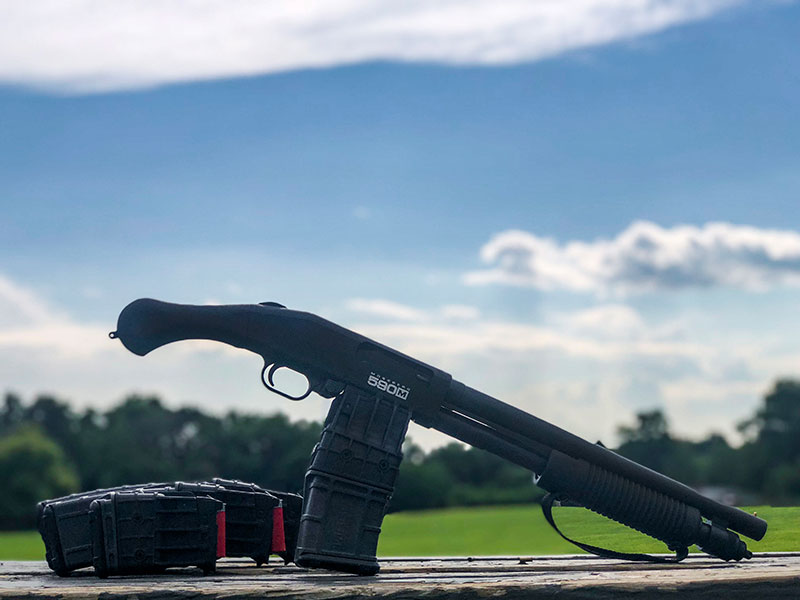 These shotguns are my personal recommendations and three of the top-selling shotguns for home defense. No matter what gun you choose to utilize for yourself, the most important aspect is to have a solid home defense plan that everyone who resides in the home is very familiar with. A plan that is not only known but practiced as well. Along with that, training and putting in the time to live fire and dry fire so that your intimately familiar with your gun. Incorporating a gun in your home isn’t enough, doing the aforementioned brings empowerment through preparedness and training. This is what differentiates mere gun collectors from those who are serious about defending their families and homes. We sincerely should all be striving for the latter.

The NEW T-Series Level 2 Compact (L2C) Overt Outside-The-Waistband (OWB) gun belt holster is Blackhawk’s lightest-weight version of the T-Series. This holster comes with Blackhawk’s Jacket Slot Belt Loop and Leg Strap Adapter for lower carry height and increased stability! Made of ultra-strong polymer that is injection molded, the T-Series is both strong and lightweight and it has an...

The Little Badger TDX Take Down Xtreme Rifle is the ultimate packable survival gun! Available in .22 LR, this lightweight, ultra-compact, break-open takedown rifle is designed to go anywhere at any time. When the action is opened and the gun folded, it measures a mere 17” overall length and stows neatly in an included pack/case....

Henry Repeating Arms is known for its quality Lever Action Rifles, but the Long Ranger Express takes it to a whole other level. HENRY’S HISTORY: When the Henry Long Ranger was released in 2016, we set a new bar in lever action precision. Combining bolt action accuracy with the speed of a lever gun, the...

One of the most popular offerings from Springfield Armory has undoubtedly been the Prodigy!The DS Prodigy™ from Springfield Armory takes the proven 1911 platform and enhances it with double-stack capacity and a performance-driven feature set. Reconfigured around a double-stack magazine, the DS Prodigy’s polymer grip module mounts to its forged steel frame offering capacities of...