Elk bugles are complex. Cows and calves, and bulls too, communicate in chirps and mews when they are on the move and when they are relaxed. Big bulls will chirp in the presence of a dominant animal.

Both cows and bulls grunt (often to get another elk to show itself) and bark (as a warning signal). And cows bugle, in the stress of birthing and when gathering the herd to move. Another female sound is the estrus call of a cow in heat. Elk have also been known to make a quacking vocalization.

Related Stories: 7 Amazing North American Hunts That Need to be On Your Bucket List

They hiss and whine. They cry and moan. They rake their antlers and stomp their hooves, but because of their volume, the sounds we are most likely to hear in August, September, October and November are bull bugles and chuckles. 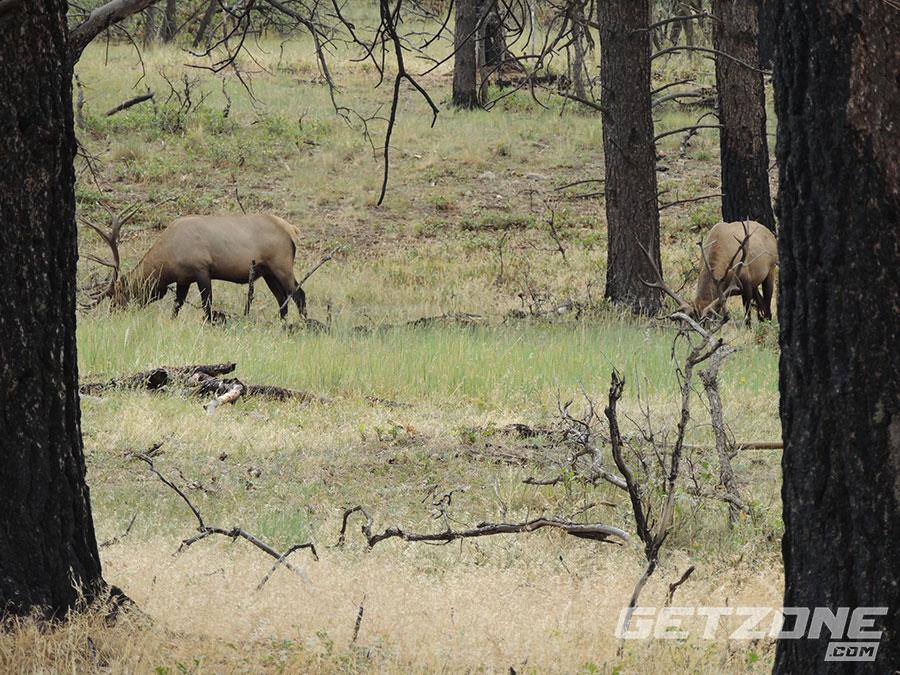 Bull elk feeding on grasses at the edge of a mountain meadow.

We can hear elk bugles in dark timber, in the river breaks and haunting the benches in rainforest coast range.

The sounds drift out of the canyons and echo in the valley. We hear them in the dark, sometimes all night long, and, when conditions are right, we hear elk bugles in the early morning and even at noon when a bull sounds off to declare his worth.

It’s easy to say it is a mating call, but bull vocalizations can mean a number of things. Every year in August, my friend, Troy Neimann and I put on elk hunting seminars in which we attempt to sort out elk bugles and what they mean.

Neimann likes to break down bull elk bugles into their components, like diagramming a sentence, to figure out what the bull is saying. 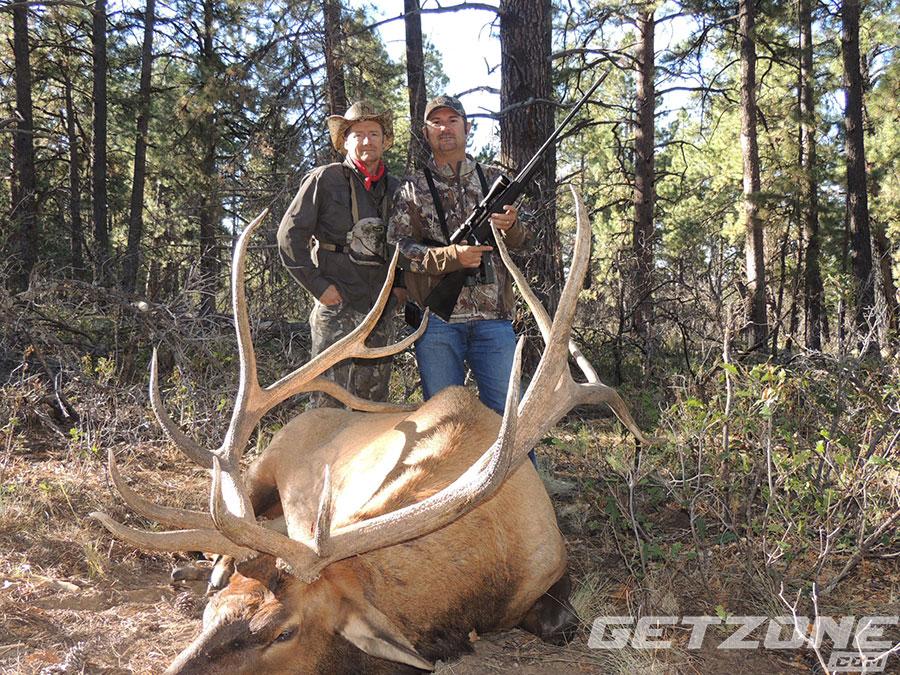 In late August and early September, bull elk break away from the bachelor groups and stake out their own territory. At this stage of the season, bulls “locate” by bugling while they establish their territory.

The call we are most likely to hear in August and early September is the locate bugle.

“It is short in duration,” Neimann says, “lasting about one-and-a-half to two seconds.” It consists of a clean high note or a double note. When a bull “locates,” it is non-aggressive, communicating bull-to-bull or bull-to-cow, like reaching out to stay in touch with the rest of the herd. I think of it as advertising.

The scream bugle is different. A bull-to-bull sound, this one establishes dominance, puts a subordinate bull in its place. One bull might locate and another, irritated, might scream. It is aggressive, a challenge, intimidation.

In the first week or so of the real breeding season, it’s safe to answer a scream with a scream and try to get this bull to show himself. 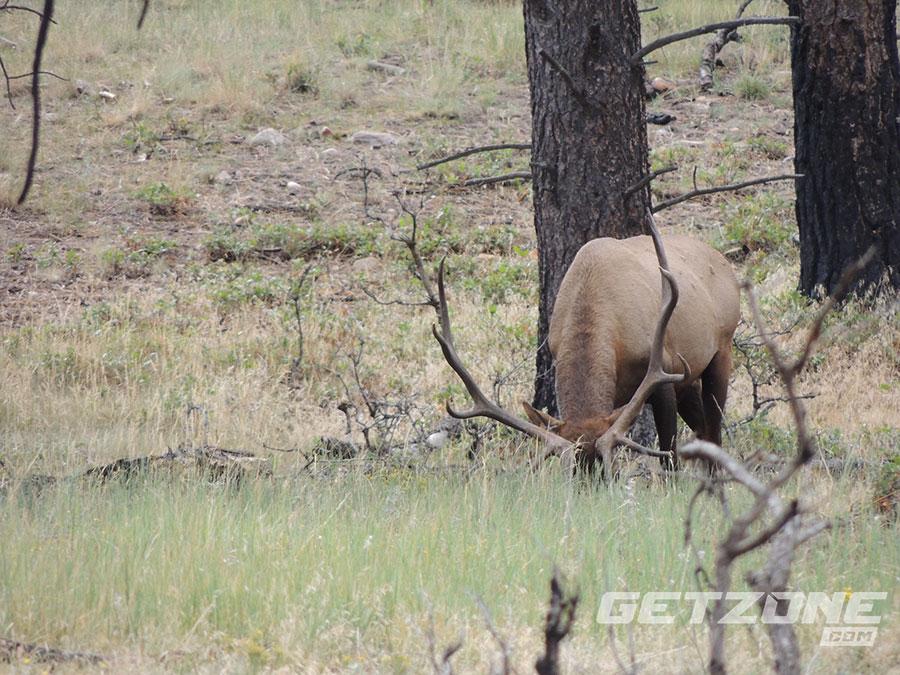 A Rocky Mountain bull elk found at a waterhole in early September.

The Display (or Hollywood) Bugle

The display is the classic full bugle, the one we hear most. Neimann calls it a Hollywood bugle.

“It starts with a growl, it carries several notes and ends with a growl.” The display is bull-to-cow and bull-to-bull communication and says, “I am worthy.” It is often used when the herd bull is displaying its antlers for social ranking and breeding worthiness.

Another common bugle, heard mid-September through the end of October, is the herding bugle. Calling to his cows, the bull gathers them to put them away, to hide them from an interloper. There is frustration in the sound. There is also a good chance the bull will put his cows away and come back to fight.

When I hear the herding bugle, I move toward it and wait. I expect the bull to come back by himself. And I will give him an hour to show up. 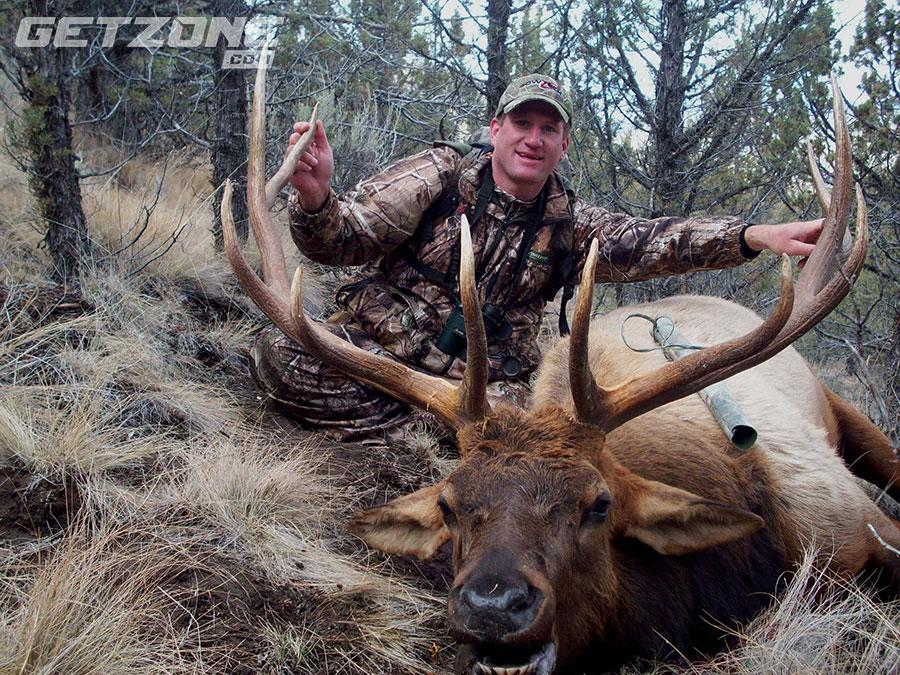 Troy Neimann with a bull elk that responded to calling.

At the end of any sort of bugle, sometimes the bull chuckles. And, for the hunter, the challenge is to figure out if it is bull-to-bull or bull-to-cow talk.

Ask yourself – are they fast or slow? We call them love chuckles when we hear the slow, plaintive, seductive cadence – a bull calling for cows.

A sharp, staccato series of chuckles means this bull is ready for a brawl.

Once, on the edge of a meadow in dry-side pine forest, we cow-called to a bull in the distance. He threw back a display bugle and silenced all the other bulls in the neighborhood, except for one bull nearby who love-chuckled, calling so low it was like a whisper. Although he sounded sick for female companionship, he was too scared to show himself. We worked around the shy one and found the spot where the big bull had bedded. His saliva was still in the dirt where he had sputtered calling back to us. 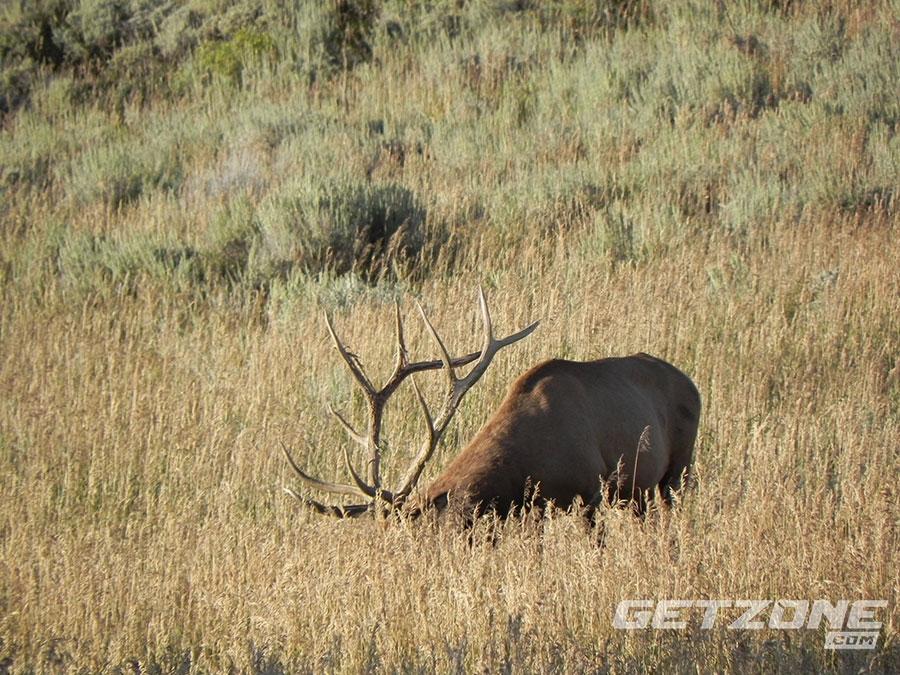 A bull elk feeding on fresh clover in a field of dry grasses.

Mention the cow bugle in any group of elk hunters and at the least you will see some raised eyebrows. It’s a good way to start an argument. 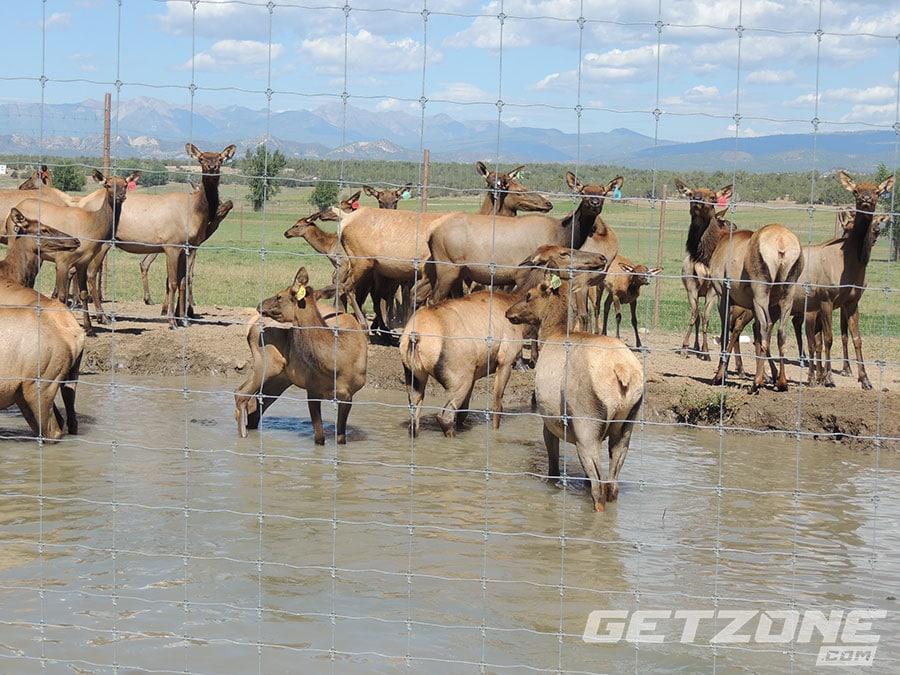 Want to hear a cow bugle? Spend time at an elk ranch in early June while elk are calving.

But cows do bugle. They have the same type of voice mechanism and they have the same kind of lung capacity. The difference is that cows have different things to say. One early June evening, watching Rocky Mountain elk on their calving ground, Troy Neimann and I observed cows bugle in the stress of those last minutes before birth.
Later, we almost stumbled over a newborn calf, still wet, laying in tall grass.

It was kind of a breakthrough for me to observe cows bugling.

The three-note cow bugle starts off on a high note and steps down, ending on a low tone. The duration is approximately that of a locate bugle, with the notes going in the opposite direction. 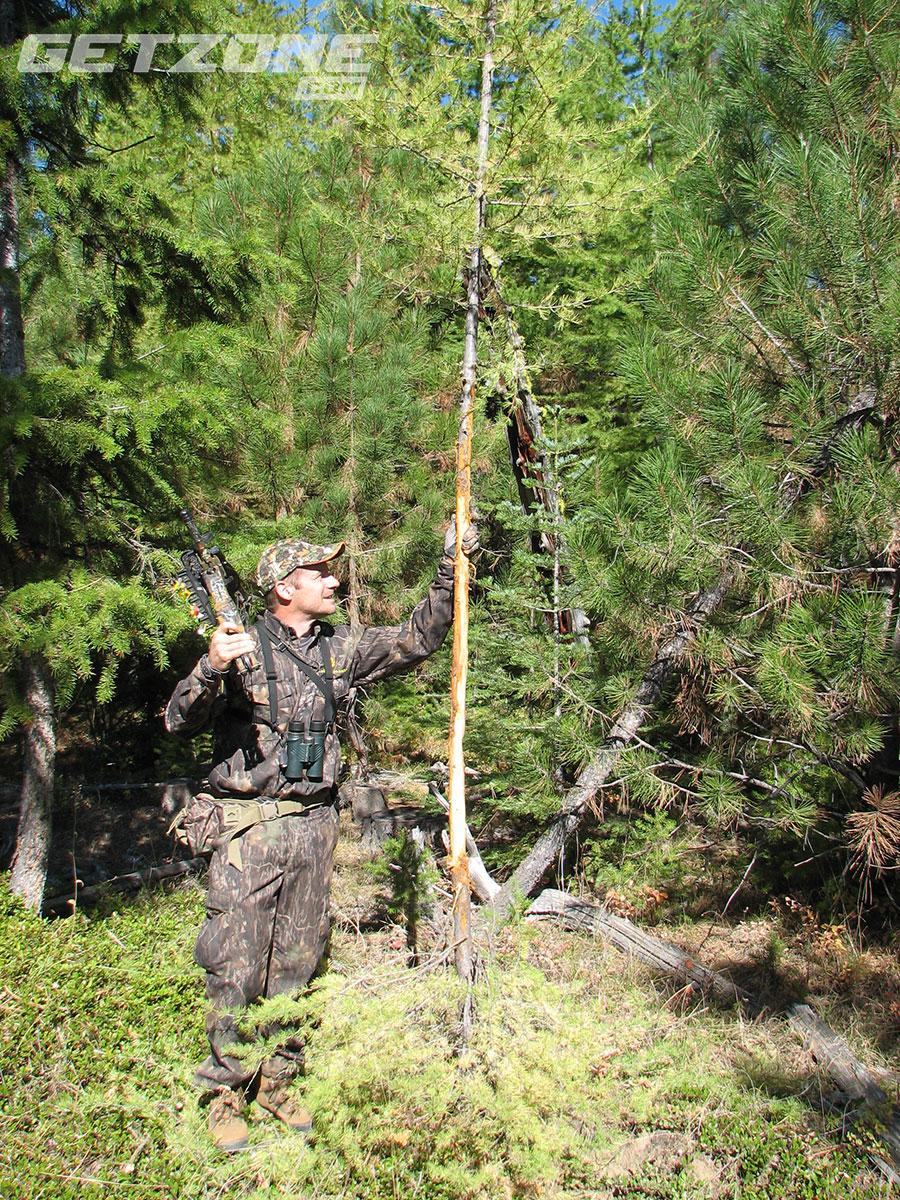 Look for elk-rubbed trees to identify a bull’s core area.

Previously I had believed the sound I sometimes heard in September was a spike squeal. I think we hear more cow bugles in the woods than we thought. Pay attention when you hear this sound – three notes, stepping down from high to low. Think of it as an assembly call. It is often made by a lead cow gathering the herd for a move.

We are still learning about elk bugles and what they mean. Each time you hear a cow or bull sound, ask yourself what it means. Sometimes the bull is telling you what you need to know to get close enough for a shot.

Gary Lewis is host of Frontier Unlimited on Pursuit Channel and Hunt Channel. To contact Lewis, visit garylewisoutdoors.com. To order a signed copy of the Hunting Oregon book, send $24.80 (includes S&H) to GLO, PO Box 1364, Bend, OR 97709 or visit www.GaryLewisOutdoors.com 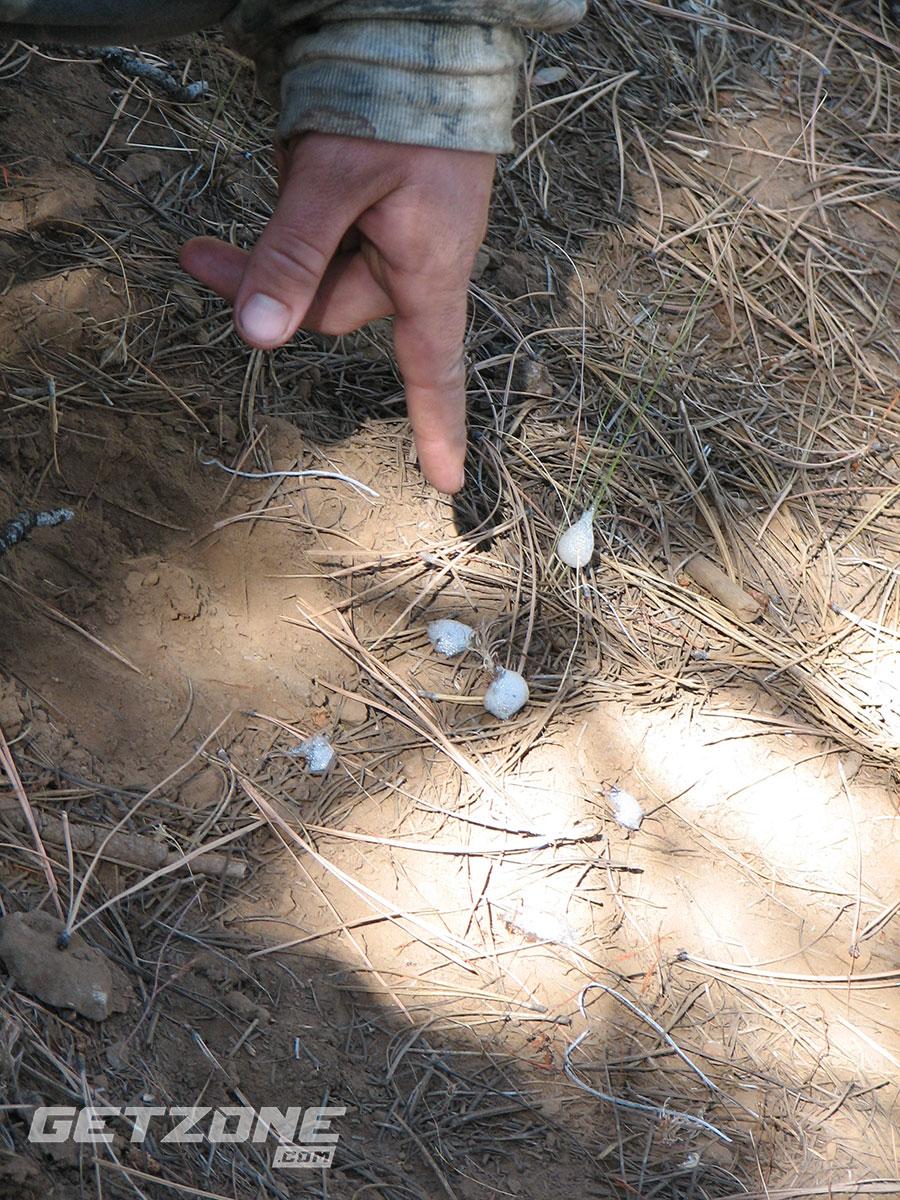 After an unsuccessful stalk on a bugling bull, the hunters found its spittle and saliva where it had bugled from its bed.

Related Articles: 14 Awesome Rifles And Shotguns That are Great For Youth Shooters 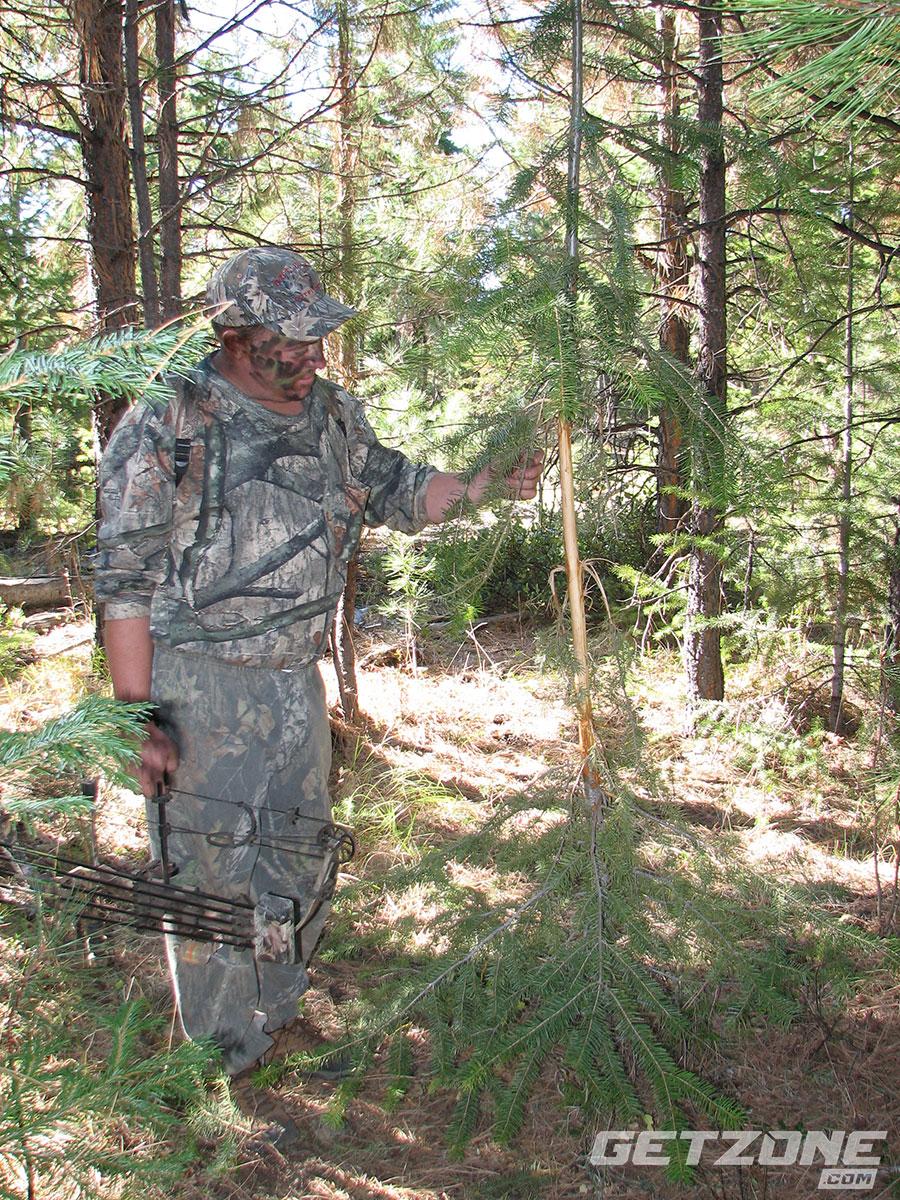 A small sapling thrashed by elk.

Related Articles: 7 Amazing North American Hunts That Need to be On Your Bucket List