When you start proclaiming any cartridge as one of the best deer cartridges you’re bound to cause conflict. After all, there are many effective cartridge options ranging from the .22s (where legal) to powerful magnum rounds and the hard-hitting .45-caliber AR cartridges. But there are certainly some cartridges that stand out in this crowded field.

Here’s a look at eight of the best deer cartridges for 2017. You may own one of these guns, you may want one (or two) of them, but one thing is for certain—they all have what you need to take a big buck this year. 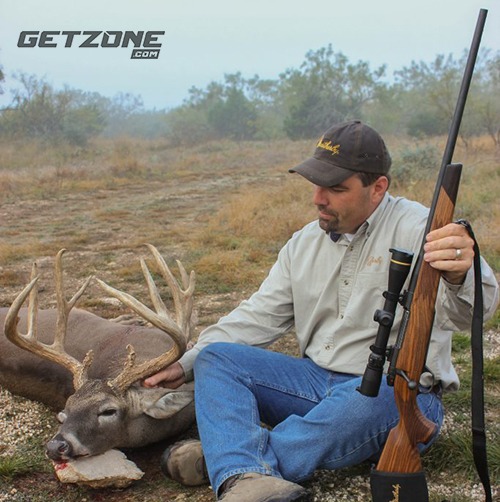 .243 Winchester: The .243 Winchester launched in 1955, the same year that Remington introduced their .244 Remington. Despite the .244’s slightly better ballistics, the Remington cartridge went through something of an identity crisis and the .243 Winchester became the more popular option. And, more than six decades later, the .243 remains a versatile and popular hunting cartridge. It’s available with bullets ranging from 55 to 105 grains, so it will work on deer as well as varmints and predators. Plus, recoil and muzzle blast are minimal, so this is a great option for hunters young and old. Regardless of whether you like bolt guns, ARs, lever or slide actions there’s a .243 for you.

Why It’s Great: The .243 offers great ballistics coupled with minimal recoil. It’s well-suited for hunting a wide-range of game, and ammo is available almost anywhere.

.240 Weatherby Magnum: Roy Weatherby liked fast cartridges, and his .240 Weatherby Magnum, which debuted in 1968, was very fast indeed. The only belted 6mm magnum inexistence, the .240 Weatherby pushes some bullets in excess of 3,800 feet per second and it is a legitimate quarter-mile deer rifle that produces minimal felt recoil. I’ve had the opportunity to shoot multiple .240s and every one that I have picked up has been very accurate, and when a group of media members carried them with me on a hunt in Texas the results were most impressive. Now Weatherby is offering these rifles in their affordable Vanguard line so you won’t have to pay top dollar to carry one.

6.5 Creedmoor: 2017 is the year of the 6.5 Creedmoor, a cartridge that has developed a larger following among hunters in a shorter amount of time than any round I have ever seen launched. In fact, virtually every bolt rifle manufacturer is now offering a gun in this ultra-popular caliber. But why is the 6.5 such a hit? Multiple reasons. First of all, the efficient case design allows for a load that shoots as flat as many magnums with far less recoil. It’s also a very accurate cartridge, and in fact the round was initially launched for the competition shooting crowd. If you prefer to hunt with an AR that’s an option with this round, too. And, not surprisingly, the 6.5 has proven to be a very versatile cartridge; it works well on coyotes, is just about perfect for deer, and is actually gaining popularity among elk hunters, too.

.270 Winchester: The .270 Winchester is one of the oldest cartridges on the list, having debuted in 1925 in the Winchester Model 54 bolt-action rifle. Despite the fact that it’s been nearly a century since this cartridge debuted, it’s nonetheless a versatile, effective hunting cartridge that’s as good today as it ever was—better, actually, thanks to improved powders and bullets. The .270 shoots quite flat and recoil is moderate, and it’s versatile enough to be used on just about any big game animal in North America. Plus, there are a bunch of rifle offerings and ammunition is both affordable and easy to find.

Why It’s Great: Rifles and ammunition are widely available, it shoots a long way and most shooters can master this cartridge.

.280 Ackley Improved: The .280 Ackley isn’t as popular as the other cartridges on this list, but it should be. That’s because it produces velocities and energy levels that are very close to those of a 7mm Remington Magnum without the kick or muzzle blast. How was this accomplished? P.O. Ackley took a standard .280 Remington case, reduced the taper and created a steeper (40-degree) shoulder angle. The result? A cartridge that is extremely efficient and is ideal for light rifles like the Kimber Montana. As an added bonus, rifles in .280 AI will fire .280 Remington ammo.

Why It’s Great: accurate and with moderate recoil, the .280 is a highly efficient cartridge that benefits from a wide array of available .284-inch bullets.

Related Story: The Aoudad Mountain Hunt You Can Afford

.30-30 Winchester: This may leave you scratching your head. The .30-30? Yes, this cartridge, which debuted when Grover Cleveland was still in office, but the .30-30 remains popular today—in fact, it’s among the top ten rifle cartridges in sales volume with at least one major manufacturer. That’s because this cartridge is highly effective and easy to shoot. There are still a handful of lever guns chambered in .30-30 for sale today, and there are other options too like the versatile Thompson/Center Encore. Is the.30-30 the flattest shooting? Nope. But if you don’t need to make 300 yard shots consistently—and the bulk of deer hunters do not—then the .30-30 will accomplish what you need.

.308 Winchester: The .308 was originally conceived as a military cartridge in the 1950s. It was a half-inch shorter than the .30-06 but nearly matched the older cartridge’s velocity and energy levels thanks to new (at that time) powders. Today, the .308 is available in a wide array of platforms; I’ve shot semiautos, bolt guns, and lever actions chambered for this round, and the .308 is a certified deer killer. In fact, when compiling a collection of the new hunting rifles for 2015 I found that the .308 was the most popular chambering, and with good reason. It’s effective, affordable, and accurate.
Why It’s Great: Lots or rifle and load options coupled with moderate recoil and superb accuracy. It’s a standout deer hunting cartridge.

.30-06 Springfield: The .30-06 is extremely popular and it is an effective deer hunting cartridge. My own experience with the cartridge has been outstanding; I’ve taken several deer (along with pigs, aoudad, bears, and African game) with this round and have yet to be disappointed in its performance. Velocities are high enough that it’s a flat-shooting cartridge but it doesn’t dole out as much punishment as the .30-caliber magnums. There are lots of great bullets and loads available and there are plenty of rifle options. Additionally, bullet selection is not as critical with the ’06 as it is with the .30 magnums because of the Springfield round’s more modest velocities. Choose a relatively tough bullet and the .30-06 will put a deer down without destroying a bunch of meat.

Why It’s Great: Ammo and rifles are available just about everywhere and recoil is manageable. No wonder this round is so popular.

Find all the ammo in this article on GunBroker.com.