As we come to the close of the year, it’s worth looking back on some of the key influences of the year.

Overall, the industry was up this year by almost any measure: NICS checks, hunting licenses, and product sales. Demand was driven by all sorts of factors, including election and political impacts, fears spurred by tragic events like Orlando, as well as a strong economy and general desire to own more firearms. The economy is still looking strong for 2016, and while demand may decrease in certain categories, we believe that overall sales will remain strong.

We thought we’d compare the top selling models for 2016 vs. 2015 and look at what changed. 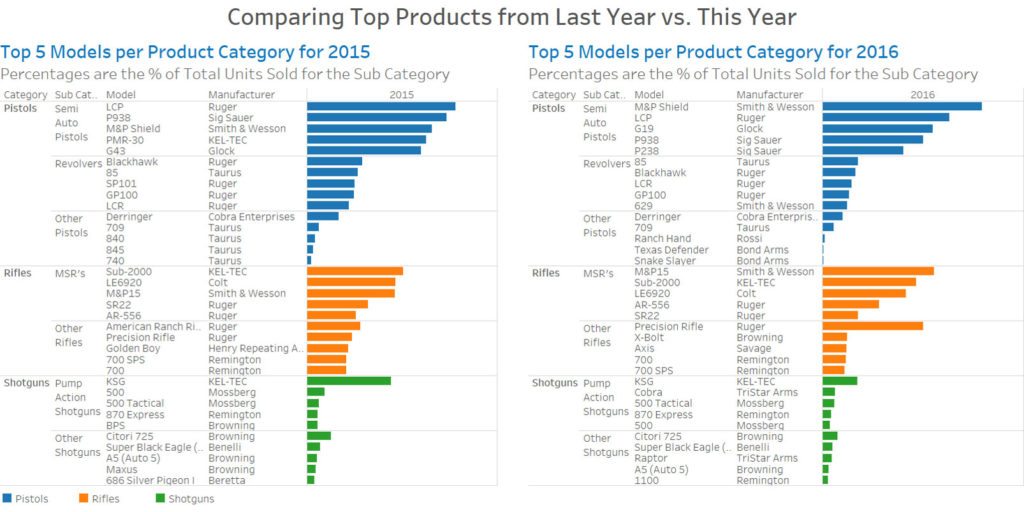 In semi-auto handguns, the S&W M&P Shield surpassed Ruger’s LCP as the top selling model, and Sig got 2 guns into the top 5.

In revolvers, the Ruger Blackhawk traded places with the Taurus 85, a cheaper model than Ruger’s. The Blackhawk actually experienced an increase in price in 2016 which may have affected the trend.

The S&W M&P15 jumped 2 slots to become the top Mondern Sporting Rifle sold this year on GunBroker. Ruger’s Precision Rifle made a big jump in sales this year, leading the “Other Rifles (bolt, lever action, etc)” by a wide margin.

Pump action shotguns saw most of the same models this year in the top as last year, with one notable exception: Tri-Star’s economically priced Cobra model. That jumped to the number 2 spot this year.