What Energy Source Are You Using? 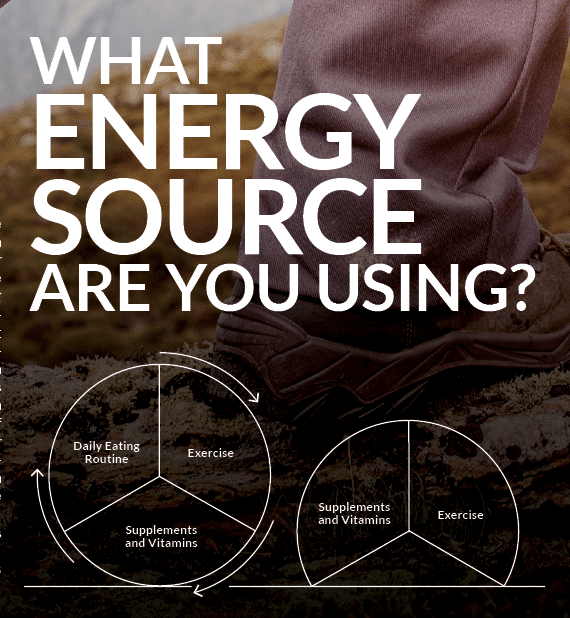 In the fitness and exercise world there are three main energy systems that our bodies use depending on the type of exercise being done. Knowing the basics of each and how they produce energy can help achieve the next level of fitness. Our bodies are complicated machines and must be given the appropriate food and supplements to ensure maximum performance in any type of exercise routine. Even if you only exercise for the once a year elk hunt in the back mountains of Wyoming, knowing what to eat and when to eat will definitely help the trek to be a little easier.

I like to compare the energy systems to a wheel that has three components: Daily Eating Routine, Supplements and Vitamins, and Exercise.

Each of these three play their role in achieving a fit and healthy lifestyle, with the eating portion taking up about 70%, and each of the other two representing about 15%. When these three components are in sync the wheel rolls gently and results come faster. When any of them are out of balance, the wheel has a flat on one-third or possibly more, making it hard to move forward effectively. With all the new workout fads, diet fads and “hot” supplements out there claiming to change everything necessary “to get you ripped in four days,” I always ask clients: If it was that easy, wouldn’t everyone be ripped? The hard fact that most people don’t want to hear is that it requires consistent work and dedication, just like anything else in this world, if you plan on being successful. I will say that most workout plans and diet plans will work if we actually put effort into them. I am not saying that all of them are good ones; I am just saying they might work if done properly.

To start having a better understanding of our bodies, and how to get them fit, it’s important to understand the three different energy systems. We’ve provided some definitions from an article published in IDEA Fitness Journal to help you understand the different systems: 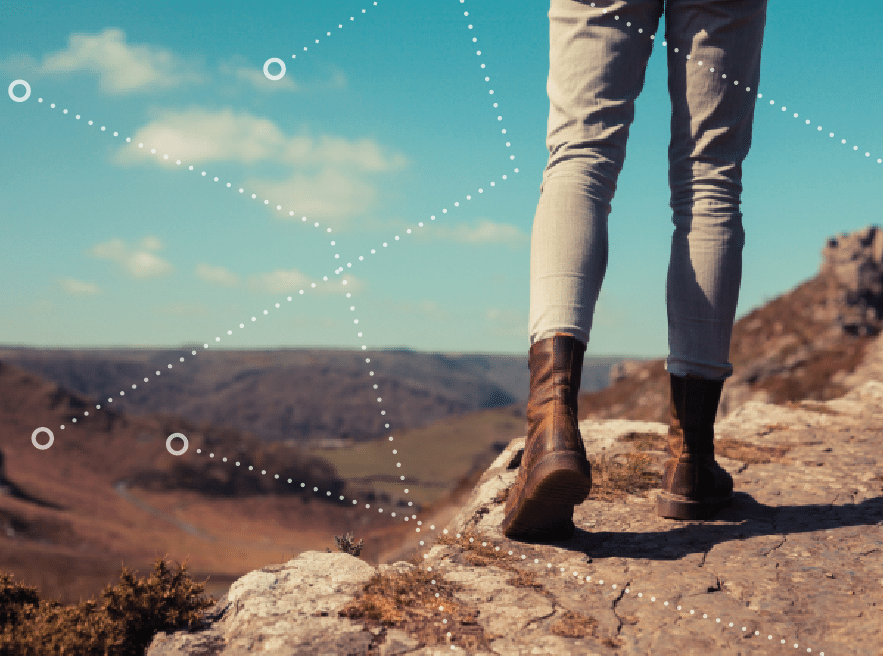 Humans produce ATP through three metabolic pathways, the phosphagen system, glycolysis and the aerobic system. Which pathway [is used] for the primary production of ATP depends on how quickly they need it and how much of it they need. Lifting heavy weights, for instance, requires energy much more quickly than jogging on the treadmill, necessitating the reliance on different energy systems. However, the production of ATP is never achieved by the exclusive use of one energy system, but rather by the coordinated response of all energy systems contributing to different degrees.

During short-term, intense activities, a large amount of power needs to be produced by the muscles, creating a high demand for ATP. The phosphagen system (also called the ATP-CP system) is the quickest way to resynthesize ATP (Robergs & Roberts 1997). Creatine phosphate (CP), which is stored in skeletal muscles, donates a phosphate to ADP to produce ATP: ADP + CP —© ATP + C. No carbohydrate or fat is used in this process; the regeneration of ATP comes solely from stored CP. Since this process does not need oxygen to resynthesize ATP, it is anaerobic, or oxygen-independent. As the fastest way to resynthesize ATP, the phosphagen system is the predominant energy system used for all-out exercise lasting up to about 10 seconds. However, since there is a limited amount of stored CP and ATP in skeletal muscles, fatigue occurs rapidly.

Glycolysis is the predominant energy system used for all-out exercise lasting from 30 seconds to about 2 minutes and is the second-fastest way to resynthesize ATP. During glycolysis, carbohydrate—in the form of either blood glucose (sugar) or muscle glycogen (the stored form of glucose)—is broken down through a series of chemical reactions to form pyruvate (glycogen is first broken down into glucose through a process called glycogenolysis). For every molecule of glucose broken down to pyruvate through glycolysis, two molecules of usable ATP are produced (Brooks et al. 2000). Thus, very little energy is produced through this pathway, but the trade-off is that you get the energy quickly. Once pyruvate is formed, it has two fates: conversion to lactate or conversion to a metabolic intermediary molecule called acetyl coenzyme A (acetyl-CoA), which enters the mitochondria for oxidation and the production of more ATP (Robergs & Roberts 1997). Conversion to lactate occurs when the demand for oxygen is greater than the supply (i.e., during anaerobic exercise). Conversely, when there is enough oxygen available to meet the muscles’ needs (i.e., during aerobic exercise), pyruvate (via acetyl-CoA) enters the mitochondria and goes through aerobic metabolism.

When oxygen is not supplied fast enough to meet the muscles’ needs (anaerobic glycolysis), there is an increase in hydrogen ions (which causes the muscle pH to decrease; a condition called acidosis) and other metabolites (ADP, Pi and potassium ions). Acidosis and the accumulation of these other metabolites cause a number of problems inside the muscles, including inhibition of specific enzymes involved in metabolism and muscle contraction, inhibition of the release of calcium (the trigger for muscle contraction) from its storage site in muscles, and interference with the muscles’ electrical charges (Enoka & Stuart 1992; Glaister 2005; McLester 1997). As a result of these changes, muscles lose their ability to contract effectively, and muscle force production and exercise intensity ultimately decrease.

Since humans evolved for aerobic activities (Hochachka, Gunga & Kirsch 1998; Hochachka & Monge 2000), it’s not surprising that the aerobic system, which is dependent on oxygen, is the most complex of the three energy systems. The metabolic reactions that take place in the presence of oxygen are responsible for most of the cellular energy produced by the body. However, aerobic metabolism is the slowest way to resynthesize ATP. Oxygen, as the patriarch of metabolism, knows that it is worth the wait, as it controls the fate of endurance and is the sustenance of life. “I’m oxygen,” it says to the muscle, with more than a hint of superiority. “I can give you a lot of ATP, but you will have to wait for it.”

The aerobic system—which includes the Krebs cycle (also called the citric acid cycle or TCA cycle) and the electron transport chain—uses blood glucose, glycogen and fat as fuels to resynthesize ATP in the mitochondria of muscle cells (see the sidebar “Energy System Characteristics”). Given its location, the aerobic system is also called mitochondrial respiration. When using carbohydrate, glucose and glycogen are first metabolized through glycolysis, with the resulting pyruvate used to form acetyl-CoA, which enters the Krebs cycle. The electrons produced in the Krebs cycle are then transported through the electron transport chain, where ATP and water are produced (a process called oxidative phosphorylation) (Robergs & Roberts 1997). Complete oxidation of glucose via glycolysis, the Krebs cycle and the electron transport chain produces 36 molecules of ATP for every molecule of glucose broken down (Robergs & Roberts 1997). Thus, the aerobic system produces 18 times more ATP than does anaerobic glycolysis from each glucose molecule.

Fat, which is stored as triglyceride in adipose tissue underneath the skin and within skeletal muscles (called intramuscular triglyceride), is the other major fuel for the aerobic system, and is the largest store of energy in the body. When using fat, triglycerides are first broken down into free fatty acids and glycerol (a process called lipolysis). The free fatty acids, which are composed of a long chain of carbon atoms, are transported to the muscle mitochondria, where the carbon atoms are used to produce acetyl-CoA (a process called beta-oxidation).

Following acetyl-CoA formation, fat metabolism is identical to carbohydrate metabolism, with acetyl-CoA entering the Krebs cycle and the electrons being transported to the electron transport chain to form ATP and water. The oxidation of free fatty acids yields many more ATP molecules than the oxidation of glucose or glycogen. For example, the oxidation of the fatty acid palmitate produces 129 molecules of ATP (Brooks et al. 2000). No wonder clients can sustain an aerobic activity longer than an anaerobic one!

Understanding how energy is produced for physical activity is important when it comes to programming exercise at the proper intensity and duration for your clients. So the next time your clients get done with a workout and think, “I have a lot of energy,” you’ll know exactly where they got it.

I know this gets a little lengthy but a little background of how our bodies operate is helpful in understanding what we can do to power up before our next exercise routine. At the bare minimum eat some carbohydrates about 30 to 45 minutes before exercising and see how much more energy you have. Without having some carbohydrates in our system would be pretty darn close to having close to an empty tank in your car and trying to drive another 100 miles. It probably just isn’t going to work very well.

You have heard it before and I will say it again – You are what you eat!

By Joel Jansen. Originally published in the September 2015 issue of GunUp the Magazine. Source: www.ideafit.com/fitness-library/the-three-metabolic-energy-systems.