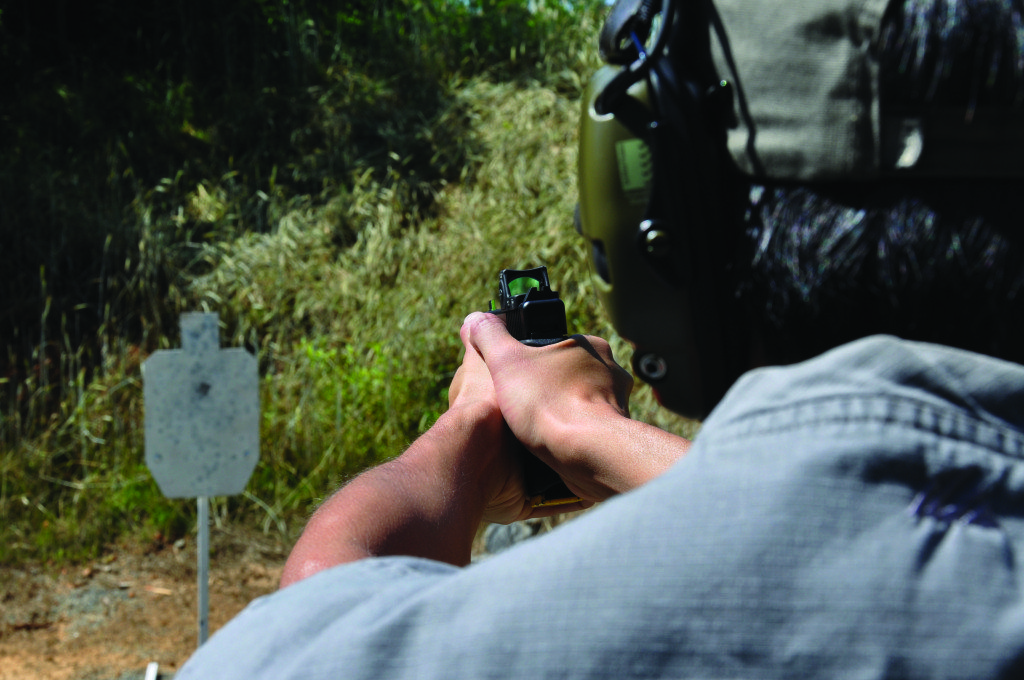 More and more shooters mount red dot sights on their defensive pistols, but there are no divisions in the major practical shooting sports for these gun owners to compete with their new red dot-bedecked gear. Could this be stifling the growth of the technology and keeping early adopters from the benefits of competition?

The most obvious sport for this technology is the International Defensive Pistol Association (IDPA), which was founded on principles of defensive shooting: real world scenarios and common guns deemed suitable for self-defense. There was also a belief that the major shooting sport of the time, International Practical Shooting Confederation (IPSC/USPSA), had become an equipment race; too focused on gear and moved too far from reality.

However, since 1996 the reliability and durability of the miniature red dot sight (MRDS) has increased to match the expected life of polymer service pistols. The MRDS is becoming more common and has been deemed suitable for self-defense by many instructors.

The equipment race has caught IDPA.

IPSC’s Open division is what many people think of when they picture the sport. Featuring recoil compensators, lightened slides, extended magazines and frame mounted red dot optics; when the topic of the MRDS comes up, this is what IDPA doesn’t want to happen.

However, the addition of such a division could move the sport forward without changing the focus.

Introduction to the MRDS

One of the most popular MRDS on the market, the Trijicon RMR, was designed at the request of the US Army Special Operations Command to be mounted on top of the ACOG as a quick acquisition sight. While built for the carbine, it was constructed with the idea that it could be mounted on a pistol and it wasn’t long before it was being used in combat. Since its development, Trijicon has continued to enhance the durability of the RMR and now strives for over 20,000 slide cycles; which matches the expected life of popular service pistols.

The MRDS design is perfect for defensive use because it encourages shooting with both eyes open and puts the dot in the same focal plane as the threat. This works with our natural physiology and eliminates the requirement to focus on the front sight; a distance that can be difficult for many aging shooters.

The mil-spec durability and target focus shooting makes them viable options for defensive use. Unfortunately there are a number of rule changes that would need to occur for them to be shot in sanctioned IDPA competition.

There is currently no division for optics in IDPA so a new division would need to be created, I’ll call it “Custom Defensive Optics” or “CDO.” While most IDPA rules could still be enforced there would need to be a couple changes beyond permitting the use of optics.

First, to stay true to the founding principles of IDPA, CDO needs to be limited to MRDS that are suitable to carry. The large frame-mounted reflex sights common in IPSC’s Open division are not concealable, and therefore would be illegal in the CDO division. In IDPA, the optics would need to be slide mounted and require back-up notch and post sights. This set-up allows concealable carry in common holsters and reliable back-up if the battery powered sight fails.

Historically IDPA has restricted modifications to the frame or slide, but the only two guns that come optics-ready from the factory are the Smith & Wesson CORE and the FNH FNX 45 Tactical, which doesn’t even fit in the box to begin with. In order for more shooters to participate this restriction would need to be lifted to permit mounting on other common guns.

An MRDSs can be attached to a plate mounted via the rear sight channel, the best method requires milling the slide like on the Glock 19 modified by ATEi; in other classes this would be illegal slide lightening. While it would be tempting to add a maximum overall weight change to limit customization, it would be a nightmare to police. The simplest solution would be to either allow any slide modification in the class or just those that don’t create a hole in the slide.

Third, the optics do add additional height to the pistol and in almost all cases it would keep them from being able to fit in the IDPA box (A box roughly 0.25 inches larger than a 5-inch 1911 in each direction and defines the max size semi-auto guns are permitted to be in IDPA).

The Trijicon RMR on my ATEi modified Glock 19 has proven to not affect concealability, so I believe the box requirement should be waived for CDO as well, so long as the gun could fit with the optic removed. Revolvers are already excluded from this rule because of the width of the cylinder so there is a precedent that can be followed.

All other IDPA rules including the holster, could remain unchanged, however I’d like to see two other modifications permitted.

More shooters also add lights and lasers to their defensive pistols. Lights permit positive target identification, which is a critical skill in defensive shooting, and lasers permit the same target focus as the MRDS.

The “equipment race” is the main reason that these have not been allowed in the past as the extra weight on the front of the pistol could reduce muzzle flip and thus give the shooter a competitive advantage. A light would make shooting in low light stages easier for the shooter and require specialized holsters that are not commonly available.

Jeff Cooper famously addressed this issue in a January 2002 Guns & Ammo article when he wrote “Maybe the first thing one should demand of his sidearm is that it be unfair.”

In 2013, slide mounted optics, laser grips/guards and white lights have been deemed suitable for self-defense by many top trainers for concealed carry and almost required for home defense. Barring their use keeps many people from competing with their carry gun, prevents some competitors from carrying the best tool to defend themselves and their families and motivates some gun culture 2.0 shooters to look to other sports.

Maybe it’s time for carry guns to be unfair.

By Ron Larimer. Originally published in the July 2013 issue of GunUp the Magazine.

There’s nothing quite like spending some time outdoors with the Women On Ice. While enjoy the winter weather up on Lake of the Woods in northern Minnesota, founder Barb Carey shared her top tips for having a successful fish fry – on or off the ice. If you’re thinking about frying up your catch of...