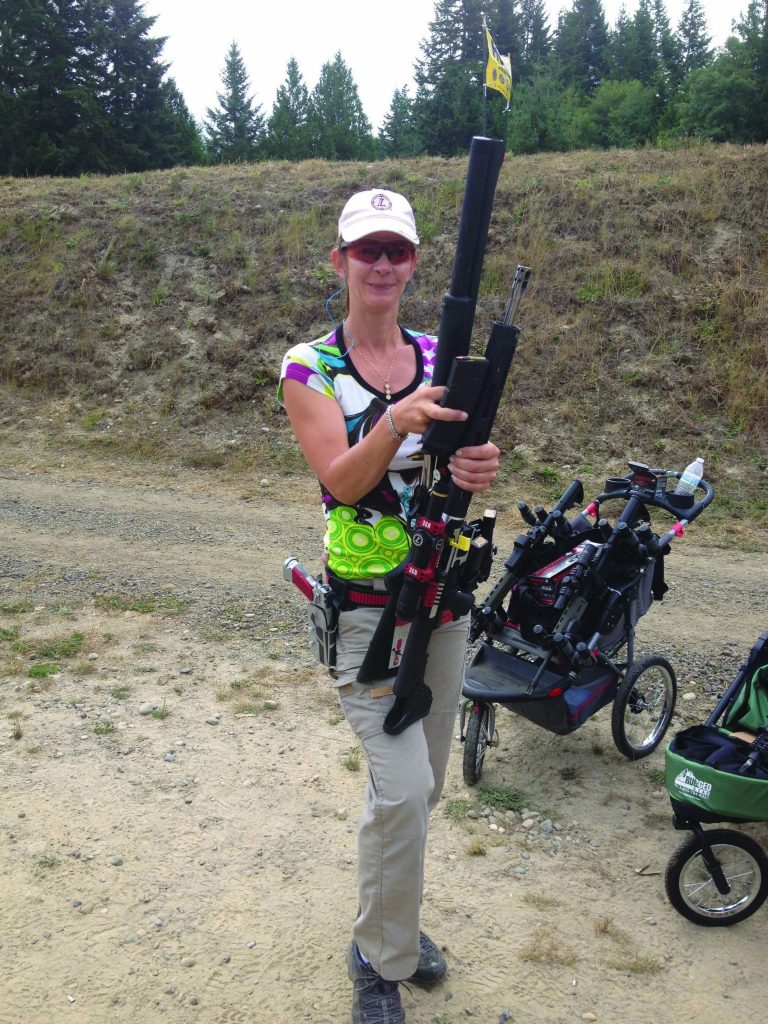 Why oh why did I not just take up pistol shooting? I can put all components of pistol shooting and competition in one range bag, throw it in the back seat of my car and off I go, easy. Instead, I took up the shooting sports of High-Power and, more recently, 3-Gun. The back seat is no longer big enough for my 3-Gun and High-Power Range Gear, I need the bed of a truck! I quickly counted off the top of my head, and I need about 16 individual items for my High Power shooting. If that is not bad enough then I add 3-Gun and that raises the count to about 18-plus items. What was I thinking? It is so much stuff that I have rolling carts to hold everything to get around at a match. It is so much that if I fly to a match I can spend an extra $200 on overweight or oversized luggage for my High-Power Range Gear. It is so much that… Well, you get the picture.

Check out range bags for sale on GunBroker.com. 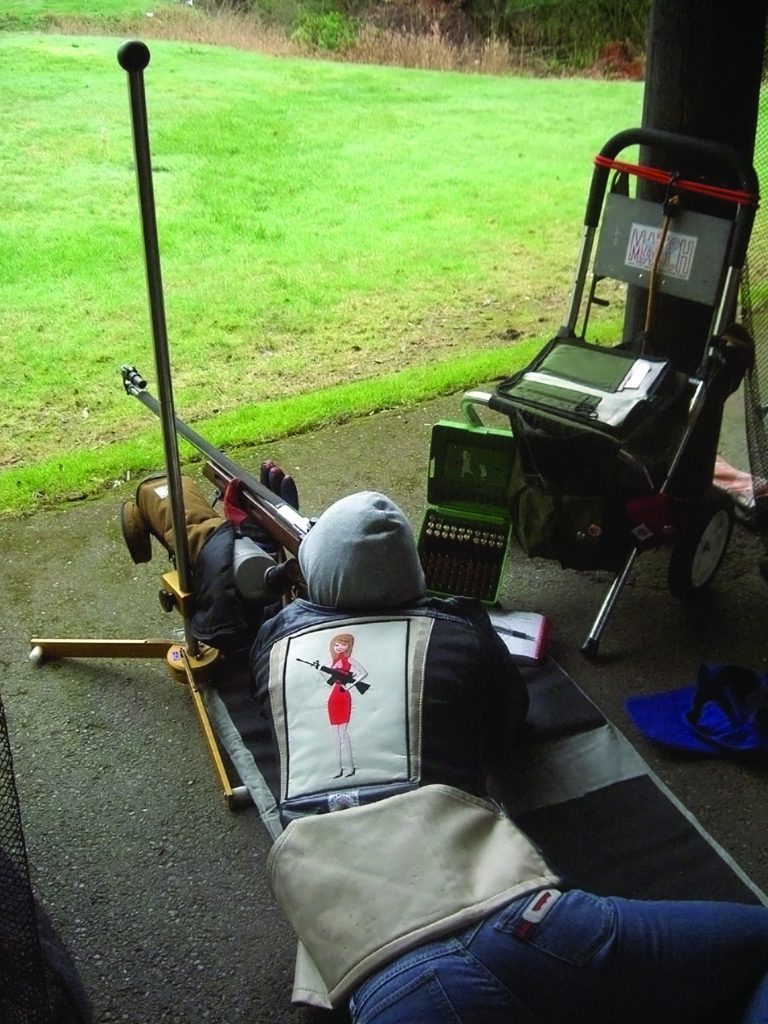 Across the Course and Prone Long Range – High Power Competition

Shooting High Power competition involves two separate categories: Across the Course and Prone Long Range. Most of the gear works for both categories, but Across the Course requires a shooting bench, which is a very bulky accessory. For 3-Gun we need the “Baby Stroller” to hold all three guns plus the ammo and gear; the stroller makes it easier to move from stage to stage. I understand now why it can take years to accumulate everything one needs for the sport, and you can understand why it takes a truck for me to go to the range.

The High-Power Range Gear I use:

If I am shooting Across the Course I use my AR15 service rifle. We shoot positions from 200 to 600 yards. Offhand at 200 yards requires a bench so you have someplace to rest your rifle in between rounds. We have added weight in the buttstock in these rifles making the weight about 12 pounds. Holding the rifle up for 22 minutes would be impossible. The bench doubles as a range bag that can hold all of the little accessories and ammo.

The one-inch thick leather shooting jacket alone adds approximately 15 to 20 pounds to my range kit. Having to wear the shooting jacket, I call it the straight jacket, is the one and only time I am envious of the F-Class shooters because they shoot with rests they do not need the jackets. Since we shoot self-supported we need the jacket to support the sling. In 100-percent humidity in Ohio, it is miserable wearing that thing. In fact, everything is padded: my mat, my glove, and my jacket. No wonder I am a sweaty mess when I am finished with a string!

The rest of my outer accessories are a bit dorky. My fashionable hat does have a purpose; to shield any side sun or distractions, plus it has a built-in eye-patch for my left eye which makes shooting with both eyes open much easier. There is a method to this madness: Because we shoot with iron sights we need the spotting scope to see the scoring on our targets 1000 yards away. I also can use it to see any mirage downrange that may affect bullet drift. It is my best friend when the range flags are going in different directions.

Another item I did not include in the list is a camera and Go-Pro. These now need to be part of the range kit. We all want to record ourselves in each stage so that we can one, show off to our fans on Facebook the awesome stage we had, or two, never in a million years show it to our fans on Facebook because the run was such a disaster and we will only use it as a learning tool. I think we all know what I am talking about.

Not everyone has a cart or stroller, but they really are great to have at 3-Gun matches. I’ll never forget the look on the woman’s face when my husband told her the utility baby stroller we were buying from her was going to be used for shooting competitions. If you show up to a 3-Gun match you will see many designs of rolling carts and “strollers” being used. Instead of paying big bucks for converted strollers made for 3-Gun, we thought we would find used strollers at the Goodwill and convert them ourselves. In fact, my husband surprised me with the first one; he made it for my birthday. I loved it. He found one stroller at the second-hand store but then he hit Craigslist for the second one. You can get away with not having a rolling cart and just use a couple of large bags, but why? You have ammo for three guns, all of the extra magazines and the three guns. Try shooting the MGM Ironman without a cart. Three full days of stages and thousands of rounds of ammo. I’ll take the cart, thank you.

As much as I am bragging about all of the gear I get to lug to the range I have, at times, also forgotten some key items. Call them range bag bloopers if you will. I know I am not the only one! Earlier this year I went to a local club championship and realized I did not have the bolt in my rifle. I had not used it since the last flight I took with it. I always take the bolt out and pack it protected in a case. As I was repacking my car to go home another shooter that I know arrived who also shoots an RPA Quadlock. He had his extra rifle with him and was able to give me his bolt. I took second place in the match. There are many small instances where I have forgotten targets, staplers, and even magazines. But the most memorable was when I forgot my shoes. As strange as that sounds I do have an explanation: In the summertime, I don’t like to wear my boots to and from the range so I wear sandals or flip-flops. This day I was wearing my rhinestone-studded flip-flops. We arrived at the competition and I went to grab my boots and realized I had left them by the front door. I thought I was going to have to shoot an Across the Course match in rhinestone flip-flops, but fortunately, miracles do happen and there happened to be a Target down the road that was open at eight in the morning on a Sunday.

By Anette Wachter. Originally published in the February 2014 issue of GunUp the Magazine.

There’s nothing quite like spending some time outdoors with the Women On Ice. While enjoy the winter weather up on Lake of the Woods in northern Minnesota, founder Barb Carey shared her top tips for having a successful fish fry – on or off the ice. If you’re thinking about frying up your catch of...