GetZone » New Gun Owners » Should You Red Dot Your Shotgun?

Should You Red Dot Your Shotgun? 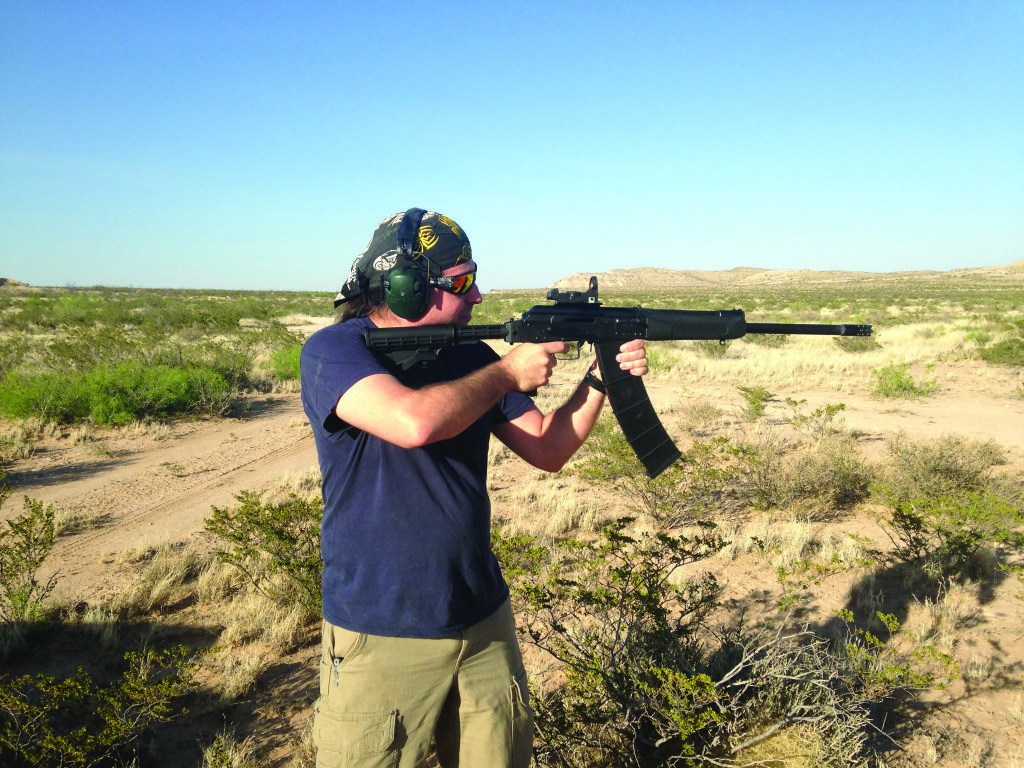 Firearms have been in existence in one form or another for hundreds of years. As a technology, the field is well near fully matured. Rare is the occasion that something truly new and revolutionary comes along, and yet occasionally another technology matures just enough to create a new and unique application.

Putting a scope on a shotgun is a well-established practice, and one especially favored by deer and turkey hunters. Red dot sights have been around for a few decades and gained traction among law enforcement and military users for use on rifles as well as among competition shooters using pistols, but what about putting a red dot on a shotgun? Here and there it’s possible to find a few shotguns equipped with red dot sights, but they are still far from common.

Should you consider a red dot sight for your shotgun? There are many different types of red dot sights out there, and each has its own advantages and drawbacks depending on the application.

Unlike rifles and pistols, a shotgun (when not firing slugs) uses shot, small pellets of lead that spread out in a pattern from the muzzle. Contrary to the beliefs of novices, shotguns must still be precisely aimed in order to hit a target. The front bead sight, when used in conjunction with proper cheek weld, has proven itself more than capable in this regard. It is fast, gives the widest possible field of view, and allows the shooter to focus their eyes on the target and not the bead. Red dot sights also provide a single dot as the sight picture, but have the advantage of remaining accurate even when the shooter’s form is less than perfect which potentially provides a speed advantage.

Burris’ FastFire miniature red dot sight (MRDS) was probably one of the first red dot sights to be specifically made for and marketed to wingshooters in the form of the SpeedBead, but there are others that also lend themselves to the task. Sights like the EOTech have a unique reticle that can be useful for establishing leads on moving targets. Other platforms such as the OKO utilize a more open design. This makes the sight slightly larger, but the layout allows a larger lens.

In its most basic form, the EOTech red dot sight has a large 65-MOA circle surrounding a one-MOA dot in the center, but the middle aiming dot can be harder to pick up quickly due to its small size. By contrast, the Burris and OKO sights have just a single larger dot. For experienced shooters who know the proper lead this may prove more useful. For someone just getting into shooting clays or hunting migratory game birds, the EOTech with its 65-MOA outer ring seems useful in very quickly figuring the proper target lead. 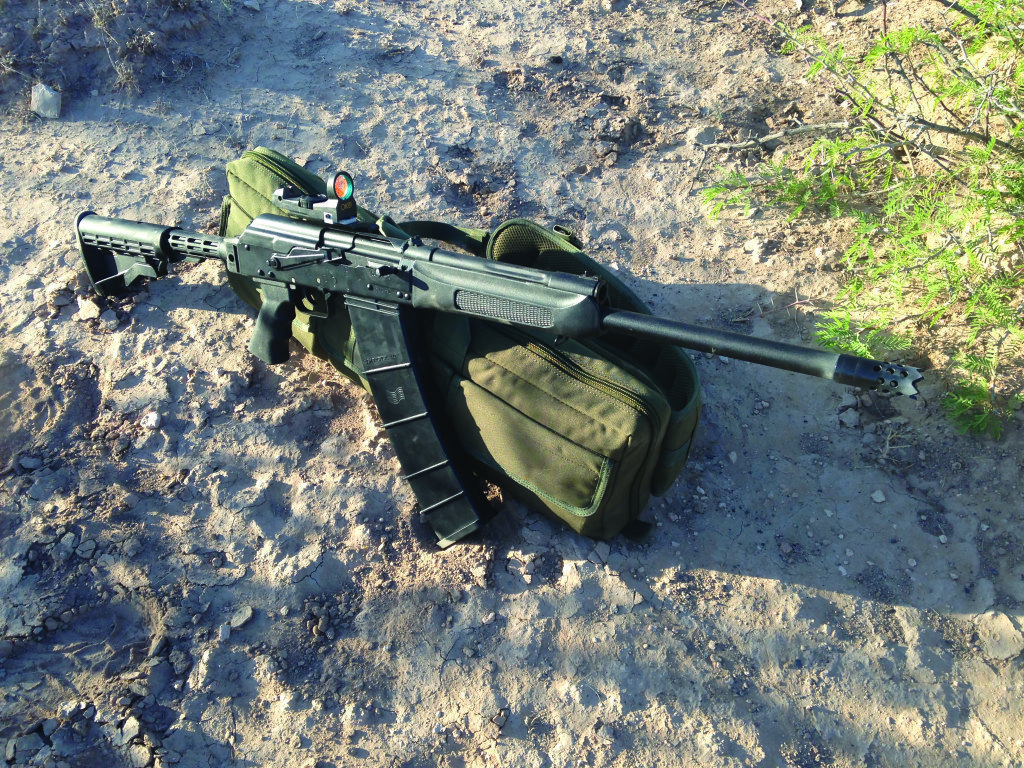 One thing to consider when choosing a red dot sight, particularly one for use on a shotgun, is how much the lens frame blocks peripheral vision. On one extreme, you can have a scope style red dot, such as an Aimpoint, which is not generally considered a good choice for wingshooting. Even unmagnified, a scope-style red dot blocks out quite a bit and narrows the field of view. A step up from that is a reflex sight like the EOTech, where the reticle appears on a single plane and is more visible from more angles. Even when the firearm is not properly mounted it is still possible to see the aiming point and put it on target. The frame of a sight like this may still block out a significant amount of the view of the target area however. Next we have the mini red dots like the FastFire. They’re smaller and have slimmer frames as well, but can still block out some peripheral vision. Finally there are the most open designs such as the OKO and others such as the more well-known C-MORE sight. These systems use very slim frames and feature a lens size over one-inch in diameter in order to afford the shooter with the least obstructed field of view.

Perched atop a tactical shotgun is where the red dot truly feels at home. After all, that was the role in which it was originally envisioned. We fitted both a Saiga and a Mossberg 930 with an OKO and EOTech, respectively. The OKO was set onto a custom machined side-rail mount. The EOTech rested on a Picatinny rail bolted to the Mossberg’s receiver. During testing we were able to launch slugs and shot down range more quickly and with more accuracy than with traditional iron sights.

Hunters in general, and bird hunters in particular tend to be some of the more traditional sort. The standard front bead shotgun sight remains to this day the most popular aiming system among wing-shooters and trap, skeet, and sporting clay competitors. Even fiber optic front sights are often eschewed as too fragile and thus unsuitable for hunting. Hunters require lightweight firearms that reliably work when needed.

To determine the viability of our sights for wingshooting, the EOTech remained mounted atop the same Mossberg 930 and the OKO moved over to a Remington 1100 that had previously been used as a dove hunting gun. Both sights set higher up on the gun, requiring each shotgun to be mounted differently with the head held up slightly higher than one might normally use when hunting birds or busting clays. An adjustable or aftermarket cheek piece could be used to solidify the stance each required, but none were immediately available at the time of testing. The Burris SpeedBead system wasn’t immediately available to us at the time, but their particular design sets the sight down lower on the gun. This presents a more traditional form to the shooter, and though there are no backup sights built into this MRDS, it is easy to set up so that it will cowitness with the bead.

In this form, the red dot sighting systems really shone. Inexperienced shooters can easily find the dot and put it the proper distance ahead of the target. Proper form was less important we found: My wife, an inexperienced shooter with no shotgun training to speak of was still able to drop clays with ease after figuring out the proper lead. Myself, I found the sights easy to adapt to and, once I got used to holding my head a bit higher, I was very pleased with how fast and easy it was to engage each target. 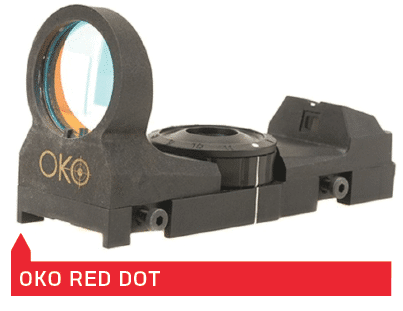 So, what are the downsides to putting a red dot on your shotgun? Like any electronic device, failure is always an option. Batteries can fail, and water intrusion can fry sensitive electronics. Almost all modern red dot sights are waterproof, or water resistant at the very least. Duck hunters in particular subject their scatter guns to all manner of mud and moisture, and yet every red dot we could identify for sale on the market today is resistant to such things. Even glass and lenses, such as OKO’s large round objective, feature coatings that allow water to roll right off when the gun is mounted.

The height of the sight above the shotgun can also be problematic, even detrimental to proper form. Burris seems to have eliminated this problem to the point that it can cowitness with the front bead using shims included with the mount, and it can be overcome on other sights by raising the stock or cheek piece. The OKO sight also has backup iron sights built in that can be used in the case of a failure by the dot illumination system, a feature that the EOTech lacks.

Perhaps the biggest problem for hunters is constantly changing light levels during the prime hunting times of dawn and dusk. Red dot sights are generally equipped with some form of brightness adjustment. The OKO and EOTech both offer multiple brightness levels, but must be manually adjusted. On the EOTech two buttons on the sight allow the user to adjust up or down in incremental steps. The OKO by comparison has a dial that can be quickly rotated through eleven brightness settings. The one sight that is specifically designed for shotguns, the Burris FastFire III atop a SpeedBead mount, has an automatic adjustment setting that keeps the dot set at a level that is high enough to be readily visible and yet low enough to eliminate glare.

Getting new hunters involved in hunting and shooting is crucial to the future long-term success of the sport. Learning the basics of wingshooting will always be important. Practicing the use of a standard bead sight, along with good form and cheek weld, will remain important. Red dot sights are simply another tool in the box. They are extremely fast and simple to use, with a field of view nearly as open as a traditional shotgun.

Should you consider a red dot sight for you and your shotgun? If you’re looking for an optic for your tactical or defensive scattergun then the answer is a resounding “Yes!” You may very well find, as we did, that the optic is faster, more accurate, and easier to use than conventional bead or iron sights, especially in low-light conditions.

Magnum Shooters Supply, exclusive U.S. importers of the OKO, was kind enough to lend us a red dot sight for the purpose of this article. Having also just recently acquired a Saiga 12 gauge and Mossberg 930, this was the perfect time to head out into the desert for some in-depth testing. We also brought along an EOTech XPS holographic sight in order to compare the two, and a Remington 1100 for additional tests shooting sporting clays.

An Introduction to Red Dot Sights

The majority of red dot sights use a partially mirrored lens to reflect light from an LED back towards the shooter. Others, such as the EOTech, utilize a laser-driven holographic sight. In this technology a laser is used to illuminate an image, in this case the reticle, which has been previously recorded onto medium such as a film or glass. The result is a three-dimensional image that appears to hover on the target.

Red dot sights as an aiming technology first gained appeal among military and law enforcement for CQB, or close quarters battle, due to the quick speed with which the dot or reticle can be acquired. They are also very easy to shoot with both eyes open, which provides a wider FOV, or field of view. With no parallax out to 50 yards or further, and infinite eye relief, target acquisition is extremely fast from a variety of positions. Once the optic is properly sighted in, a shot taken should hit whatever the dot covers.

By Daniel Scott. Originally published in the GunUp the Magazine.

At the Range: How to Clean a Handgun

At the Range: How to Read a Box of Ammo