A couple years ago I reviewed the 1911 Rock Island Armory 22 TCM – just an incredible, fun shooting pistol. In fact, it’s called the 22 micromag because this bullet holes out of this barrel in just under 2000 feet per second. So Rock Island Armory has continued to develop their 22 TCM series – and the low recoil, the accuracy, and the round count of this pistol is just phenomenal. But this is a really large pistol and so the guys at Rock Island Armory got busy.

Now, I’ve really been looking forward to the single stack models of these, namely the billboard on the side of the slide they removed to place a small little laser etched image right here with Rock Island Armory. The grips are incredible. These are VZ G10 grips. The magazines that they’re using now for the 22 TCM 1911 are stainless steel magazines with a polymer base pad, they hold 10 rounds of 9mm or the 22 TCM. Plus pulling the slide back is just easy – It’s slick, anyone can do it even with limited hand strength.

As you can see they’re making the full size government model with the 5” barrel and they’re making the commander size with the 4.25” barrel which makes it somewhat more compact with the thin, single stack design. It’s really nice and just your standard 1911 profile. But there are a lot of cool features about these two guns that we’re going to look at.

First I want to talk about the caliber. Now Fred Craig, who is a caliber designer, developed the 22 TCM from the 5.56 or the .223 case. He really needed a platform to be able to develop this cartridge further. With the Tuason family, owners of Rock Island Armory since 1941, Martin Tuason is heading things up and he is really helping to push and develop this new caliber into these pistols. Really the Tuason family has really taken the Rock Island Armory name to where it is today and the quality that stands behind this whole line of pistols – and then of course developing this unique caliber. That’s one of the things that TCM stands for: Tuason Craig Micromag. The parent case was the .223 rifle case and it was cut down into this configuration. As a 40 grain bullet, all the different dimensions here were very similar, but also the 9mm is very similar at the base case to the .223 or the 5.56. With that, the 22 TCM was developed to fit both 9mm and 22 TCM extractors, so the cases down here are more similar. Armscor makes all the 22 TCM, but they also make a number of other ammunition including the 9mm.

Looking at ammunition, the .22 long rifle is about 1060 feet per second, it’s about 99 foot pounds, so it’s a pretty low 40 grain bullet. The .380 ACP which is going at 950 feet per second and 190 foot pounds of pressure is a 95 grain bullet. A 40 grain bullet going at 1875 feet per second with 312 pounds of energy – that’s over 125 pounds of energy at the muzzle over the .380. Then the 9mm is 1300 feet per second with the muzzle energy at 420 foot-pounds and it’s a 115-grain bullet. The 9mm is definitely going to give you a little bit more superiority in ballistics, but the 22 TCM is going to give you better than even the .380 – which a lot of people consider a minimal self-defense round, but that brings the 22 TCM into a higher ballistic category. This is definitely designed for a self-defense role. It does come with two stainless steel magazines, comes with the 9mm barrel, recoil spring, and then your pistol with a lot of cool features.

I’m going to go through some of these features because one of the things about a 1911 is that you can get a basic 1911 just like the old GI model. When you start to add a lot of custom features to these guns, the price starts to go up. If you take a Wilson Combat that has all the things added to it, they can run between $3,000 to $5,000. Then you can have your budget basement 1911s that are in the $500 range. We’re going to look at some of the things that Rock Island Armory has done to this pistol to make it really, to me, a budget price but an exceptional performing 1911.

A few things to note about the 22 TCM 1911 is that the parkerized finish on here is exceptionally well done and everything is really smooth, plus it just has a really solid look to it. It has standard slide serrations and the VZ grips really stand out on these pistols. I have had a number of VZ grips for different pistols, and it has the right amount of texturing and is yet is not too aggressive. The beavertail is exceptional in that it really allows for you to bring this up and get it really high into your hand, helping you to get up on that pistol. Then you have a low bore axis it brings that hand up closer to the bore, which really helps with felt recoil. Of course with that, you have your commander-style hammer which is really nice, and then it fits very nicely into the beavertail. On top, you can see the sights immediately. These are exceptional, three-dot sights that are adjustable in the rear. In the front is a fiber optic sight which really shows up well when you’re at the range. 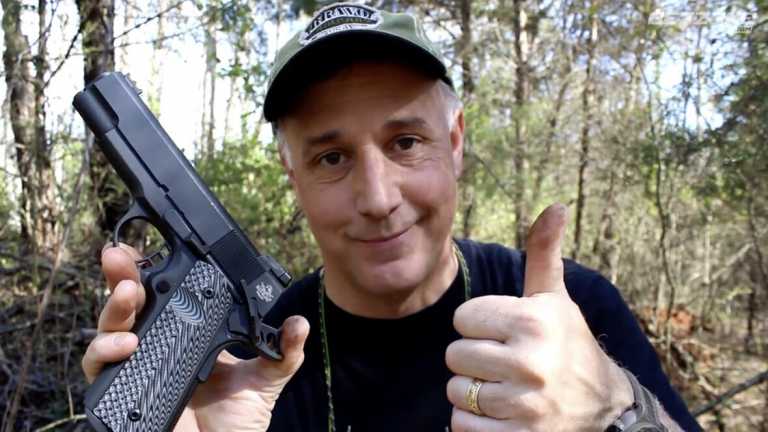 Sootch00’s 2022 Father’s Day Gift Guide is here! Hunting gear, shooting accessories, guns…the perfect gift ideas for the Dad in your life – or yourself. Burris Droptine Riflescope 3-9x40mm The 3-9x40mm is compact and lightweight, with a nine times magnification that provides enough distance for most hunting situations. The simple, rugged reticle has holdover for...

The Browning BDA was produced from 1976 all the way up until 1997. It was designed by FN and produced by Beretta. Beretta made this very similar to the Cheetah, which is their model 84 in 380 ACP. It holds 13 plus one and a double stack magazine, it’s double-single action, has the blowback design—but...