In 2011, Ruger announced a unique addition to their lineup of double-action revolvers. This was a GP100 that had been modified to the specifications of renowned gun writer Wiley Clapp to be an ideal medium frame carry revolver. Two years later, GunUp has taken the GP100 WC to the next level with a series of upgrades.

The Gun
The GP100 series has always been well regarded for its robust construction and durability. Standard models have been available in barrel lengths from three to six inches, with gutter style sights, and the classic revolver adjustable sight. The grips have changed over time from a rubber sleeve with wood inserts to the Hogue over-molded rubber grip with finger grooves that come with all the stock GP100s.

The WC model breaks away from this by going back to the smaller profile rubber sleeve and adding checkering to the backstrap and grip inserts for a more positive grip. The sights are upgraded, using a Novak rear sight and gold bead front sight that machined into the top strap and barrel. Instead of the small and frequently difficult to see sights you get on most defensive revolvers, the WC’s sights are big and bright in most lighting conditions.

Improvements
To be honest, the GP100 WC model comes from the factory in excellent condition to immediately be used as a defensive revolver. The standard features are great:

The first step in upgrading the GP100 WC was to remove the hammer spur and convert the gun to double action only. While the single-action mode is nice for shooting tight groups at long ranges, on a defensive revolver a hammer spur is just a piece of metal waiting to get caught on a jacket during the draw.

Next was to clean up the action by polishing the bearing surfaces and then install a Wilson Combat GP100 spring kit in the gun. The final step was simple: remove the excellent factory stocks, and replace them with a Crimson Trace LaserGrip. The LaserGrip adds the low-light sighting capability that a gold bead front sight doesn’t offer, while still offering a positive grip without sacrificing concealability. 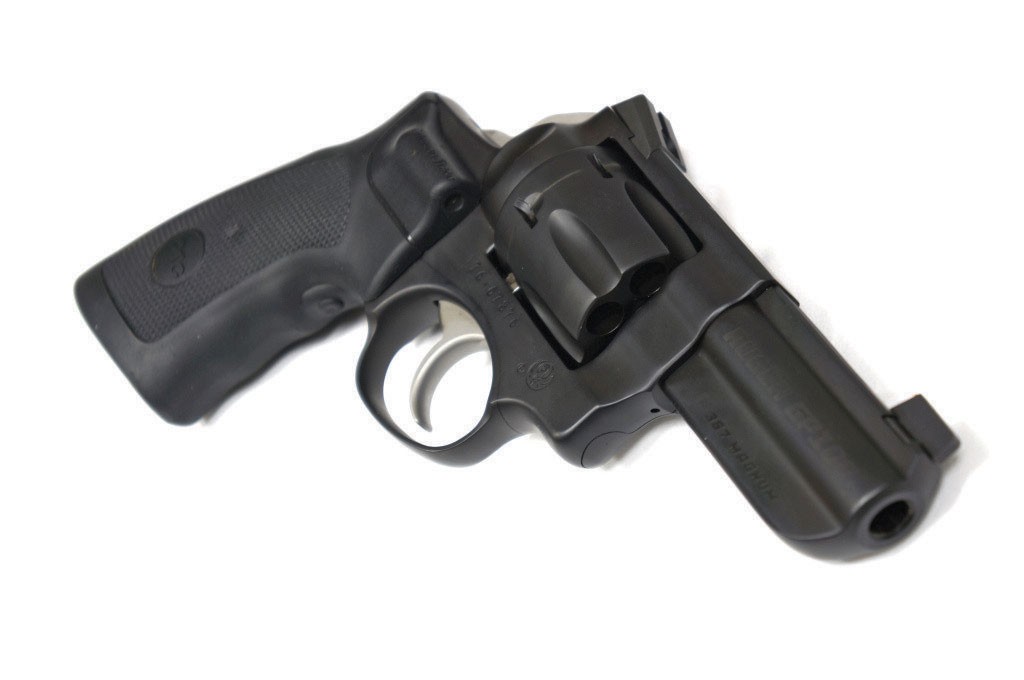 What We Like
First and foremost, the sights are great. All defensive revolvers should come with proper sights on them such as these Novaks. For years, a shooter’s only hope for sights on a defensive wheelgun were shallow, hard to see gutter sights that practically required the addition of a laser simply to be able to shoot the gun accurately. The GP100 WC doesn’t need that, and although the Crimson Trace LaserGrip is recommended, for the first time it’s not required.

The upgrades to the action have smoothed out the trigger, resulting in an 11 pound DA pull with minimal stacking at the end of its travel. This makes the gun very easy to shoot well in DA for self-defense, and also allows precise shots at long range. In fact, that precision allowed the gun to shoot consistent groups under 2.5 inches at 20 yards when shot from a standing freestyle position.

Without using a sandbag or any sort of rest, the GP100 WC turned in these group sizes with factory ammo:

For testing purposes, the GP100 was also shot off a sandbag rest at 20 yards with the Hornady .38 Special Critical Defense load, resulting in a group of 1.92 inches at 20 yards. All range and group testing was performed under controlled environmental conditions at an indoor range.

The GP100 WC isn’t just accurate; it’s also very shootable. Most tiny J-frame revolvers are capable of similar mechanical accuracy, but actually squeezing that accuracy out of the gun requires a considerable amount of talent on the part of the shooter. That’s one of the advantages of the GP100 WC – the Crimson Trace stocks are big enough to get a positive grip, so that taking advantage of its accuracy potential is easier than with a smaller defensive revolver.

That size also works well to keep the felt recoil down, should you elect to use full house magnum rounds. The DoubleTap load used for testing may say “.38 Special” on the box, but in fact is pushing a 158 grain bullet at 1000 feet per second, which is light .357 Magnum territory. Out of a small, compact revolver such as a Ruger LCR, that load is punishing for anything longer than five shots. With the GP100 WC, you can take full advantage of the gun’s weight of 2.25 pounds to dampen recoil. 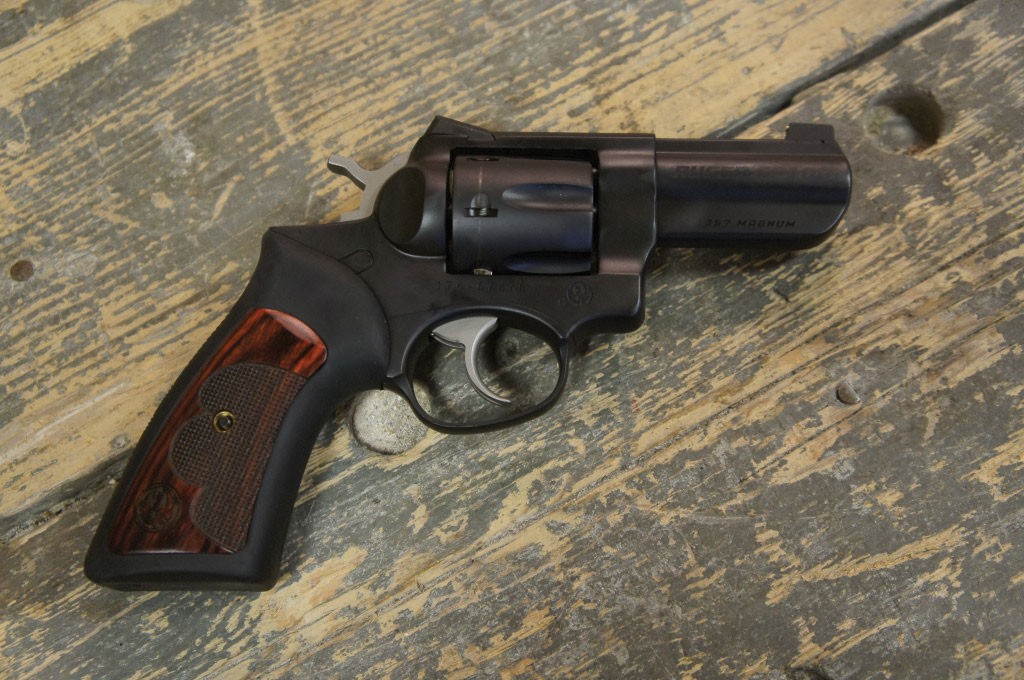 One of the smartest additions to the gun is the Crimson Trace LaserGrips. For as good as the sights are, a gold bead doesn’t work in low-light as well as tritium night sights, and the addition of a laser allows the shooter to place accurate shots in the worst lighting conditions possible. The LaserGrips give all the advantages of a good grip with the obvious benefit of a low-light aiming solution.

What we don’t like
First, it’s important to point out that this is a revolver, which means that it’s basically out of ammo when you pull it out of the holster. Also, as mentioned above, it does weigh 2.25 pounds and is roughly the same size as a Glock 17, which is lighter and holds lots more ammo. Even worked over and customized, the trigger pull is going to be longer and more difficult to manage than most modern semi-automatic pistols. In the age of modern, lightweight semi-automatic pistols that hold lots of rounds, a revolver is honestly not the best bet for most shooters.

The biggest issue with the gun is that same weight that makes it so shootable. Carrying a 2.25-pound piece of steel around all day will probably not appeal to most shooters. It’s a big, heavy gun, and concealing it will require a conscious effort.

It would also be nice if the charge holes were chamfered, which would greatly aid in speed reloads. Since it’s a revolver, you’ll be reloading it frequently in training. Doing a good speed load with a revolver is a skill that takes considerable time and practice.

The sights are great, and are a huge step forward for defensive revolvers. However, because this gun is built with concealed carry in mind, it would be preferable for the sights to be proper night sights with tritium inserts to allow for better low-light shooting capability.

The Verdict
The GP100 WC represents a big step forward in defensive revolvers. It’s accurate, concealable, and most important it’s shootable. The addition of a bobbed hammer for concealment and Crimson Trace LaserGrips nicely complement the already excellent sights. Also, in the matte blue finish our test gun is sporting, it has the looks of a menacing muscle car.

In many ways, that’s what the GP100 WC is. A modern muscle car, a Dodge Challenger SRT8 in wheelgun form. It doesn’t get good gas mileage, and it’s out-performed by more modern designs like a BMW M-Series or AMG Mercedes. But that’s not the point, because you’re not necessarily buying the Challenger because it’s the better car on paper, you’re buying it because it makes a statement. The GP100 WC, in matte blue finish with Crimson Trace LaserGrips makes a statement as well.

As defensive handguns go, it’s hard to recommend a huge, heavy pistol that hardly holds any ammo. However, if you’re a revolver enthusiast, this gun starts to make a lot more sense. It’s not designed to appeal to casual shooters looking for an EDC gun, but rather for hardcore wheelgunners who’ve been hoping for a design like this for a long time.

By Caleb Giddings. Originally published in the February 2014 issue of GunUp the Magazine.